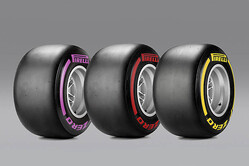 Just two weeks after the debut of the new P Zero Purple ultrasoft tyre in Monaco, it appears again as part of exactly the same nomination for Canada: soft, supersoft and ultrasoft. Canada however will present a number of different challenges to Monaco, with notably higher speeds and higher loads that generate more temperature and put increased energy through the tyres.

The circuit from a tyre point of view

Like Monaco, Canada is a low-grip circuit with a high degree of weekend track evolution.

The cars reach speeds in excess of 300kph, meaning that they tend to run low downforce.

The track is also famous for high kerbs, which provide the tyre structure with a big challenge.

Weather conditions are variable: a factor that has led to a number of safety cars in the past.

The hallmarks of Canada are acceleration and braking: longitudinal rather than lateral forces.

Montreal is a semi-permanent facility, so track surfaces (and grip) can vary during the lap.

There have been some very varied tyre choices for Canada, with no supersofts for Renault and Haas. Mercedes, Ferrari, and Red Bull have all made slightly different choices to each other.

Yellow soft: the hardest compound in the selection, poised to play an important role in the race.

Red supersoft: two teams have interestingly chosen not to nominate this compound at all.

Purple ultrasoft: very popular on its Monaco debut and chosen extensively in Canada.

How it was a year ago

Winner: Hamilton (one stop: started on supersoft, changed to soft on lap 32 of 70).

Best-placed alternative strategy: Raikkonen, fourth with two stops. Started and finished the race with the supersoft tyres but did his middle stint on the soft tyre.

The top-three finishers all used a one-stop strategy, stopping within three laps of each other.

Paul Hembery: "In Canada there's the potential for some quite mixed weather conditions, as we also saw in Monaco, so this could make it a very complex race as has often been the case in the past. The compounds that we have nominated mean that there is plenty of scope for strategy, on a circuit where it's definitely possible to overtake on the track as well. The ultrasoft made its mark when it first appeared in Monaco but Canada is a very different type of circuit with more demands on tyres. This could lead to a number of different tactics coming into play, as evidenced from the tyre choices made by each team prior to the race."

A new pit and paddock complex is planned for next year, so this will be the final time we see the ‘traditional' Montreal paddock, which is cramped but full of atmosphere.