Palmer to get new chassis for Montreal 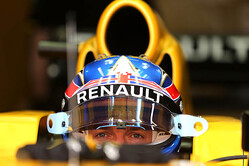 Jolyon Palmer will have the benefit of a new chassis for next weekend's Canadian Grand Prix.

Having clouted the barriers in FP1 on Thursday, which meant restricted running in FP2 also, the Briton compounded a miserable weekend when he went into the barriers at Ste Devote having lost control of the Renault on the zebra crossing on the pit straight.

Ahead of next weekend's Canadian Grand Prix, technical director Nick Chester has confirmed the Briton will have a new chassis and the upgraded engine that was only available to teammate Kevin Magnussen in Monaco.

"Jolyon's incident means we will use a new chassis - R.S.16-04 - for Montreal," confirmed the Briton. "The car hit the barriers quite hard at an oblique angle which damaged the front of the chassis and since we have a new chassis available it makes sense to introduce it.

"Fortunately, 04 was pretty far along on its build so we only needed to complete fuel cell installation and wiring for it to be ready for Canada."

Referring to the upgraded engine, he said: "It's a good step forward and we'll have it in both cars in Montreal.

"In Monaco we were able to benefit primarily from the improved driveability whereas Montréal is more a power track thanks to its straights following slow corners. This means we should really see the power unit stretch its legs."

The team revealed it will also be trying some other unspecified new parts in Canada.