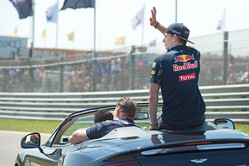 Max Verstappen received a rapturous reception when he brought F1 action back to his homeland at the Familie Race Dagen (Family Race Days) at the legendary Zandvoort circuit at the weekend.

The seaside circuit last hosted an F1 grand prix back in 1985, but this weekend the track echoed to sound of Max power as the Netherland's latest racing sensation brought the spectacular thrill of F1 back the famous venue with a series of five live demos in the double title-winning RB8.

"It was a great experience again," said Verstappen. "It's always great to see so many fans coming to this event and to drive on this track with a Red Bull Formul One car is amazing. I definitely enjoyed it a lot."

Despite his tender years, Max is something of an old hand around Zandvoort having won the 2014 F3 Masters event here. It's a favourite circuit of the 18-year-old.

"You have a little bit less run off and it's a bit more old school, with the type of turns [it has] and the elevation but that it makes very interesting," he said. "It's very challenging to find the limit of this track because of the lack of run off, so once you find that you're on the limit or very close to it, it's very exciting."

Max's show-stopping runs were the highlights of a massively busy weekend of action at the track, where the bulk of the racing action was presented by the Formula 4 NEZ championship. The seven-round championship takes in races in Russia, Finland, Sweden and the Netherlands and on home soil 15-year-old local boy and Red Bull Junior Team member Richard Verschoor set the pace.

For many youngsters in attendance, the presence of a grand prix winner not much older than themselves was the big draw and Max was delighted that the two-day event had drawn such a big crowd – estimated at 50,000 per day.

"It's a very special event, as it's for the whole family and it's great to see the ambition of the young kids already," he said. "Hopefully they also start racing. It's great for Dutch sport in general, so very happy to see that. Motorsport here got a big boost in the last couple of months and that's very positive."

The family feel was enhanced by the presence of Max's dad Jos, who provided plenty of thrills as he conducted laps in a two-seater F1 car, and there were many generations of Dutch racers present, including former Red Bull driver Robert Doornbos, who contest three grands prix for the team in 2006, as well as racing eight times for the Minardi squad the previous year.

So, with F1 fever at an all-time high in Holland, how long before the world's top single-seater category heads back to the beach for a round at magnificent Zandvoort? It's something Max is longing to see.

"I definitely hope so. For sure there are a lot of things still to do but if it works I'll be really happy and I think the fans will be too!"