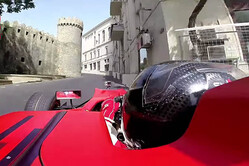 Pirelli Motorsport boss Paul Hembery has admitted concerns over the Baku City circuit which this weekend hosts the Grand Prix of Europe.

The Briton is concerned that the nature of the track, which features a number of long straights and is certain to become the sport’s fastest street circuit, could lead to a phenomenon called 'standing wave', similar to that encountered by Michelin over the weekend of the infamous 2005 Grand Prix at Indianapolis and again at Spa last year when Sebastian Vettel suffered a tyre failure.

Indeed the run from T16 to T1 will see the cars at full throttle for around 20s if turns 18 and 19 are taken flat-out as expected, somewhat similar to the run between T1 and T5 at Spa.

"Long straights can create standing wave issues," Hembery told Motorsport.com. "It seems to be a circuit that shouldn't be too dramatic, but it has that straight, so we have to be very careful on that in terms of what's going on with the standing wave management.

"If you go to a new circuit, it can throw up some surprises," he admitted. "The tendency to new circuits in recent years is smooth surfaces with very low levels of wear, but there is quite an aggressive straight and standing wave is something we have to manage, so there is an aspect of tyre integrity that we have to monitor well."

There are also fears that the high temperatures - estimated at between 32 - 34 degrees C - over the weekend could see cars lift the temporary tarmac laid over cobblestones in one particular section of the track, though one has to wonder why it has taken until 48 hours before the first practice session to realise this.

"A temporary surface, if it does start breaking up, you have a major issue," said Hembery, "because repairing it is a major issue. That's something that needs to be monitored and needs checking.

"In fact, Singapore's got something similar," he added. "We go over some paving this year where they've slightly changed the routing of the circuit."

Check out our Build Up gallery, here.