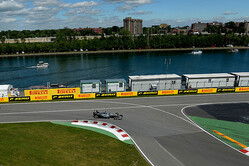 All three compounds selected for the Canadian Grand Prix were used during free practice today, which started in the morning with just 14 degrees centigrade ambient. In those cool conditions drivers had to pay particular attention to tyre warm-up, to ensure that the tyres were operating within their correct working range and extract the maximum of their potential.

As a result of the cool temperatures in the morning there was some graining but this is a normal phenomenon in Canada, which is expected to diminish as more rubber is laid on the track. By the end of FP2, temperatures have raised significantly with about 0.6 seconds separating the ultrasoft from the supersoft tyre, although this gap should come down slightly as the weekend progresses.

Lewis Hamilton already beat his 2015 pole time during FP2, en route to a best time of 1m14.212s on the ultrasoft tyre. With the weather in Canada always unpredictable - cooler conditions are expected for Sunday - it was important for all the teams to gather as much information as they could about each compound on different fuel loads.

Paul Hembery: "The teams were able to get a good read on all three of our slick compounds today, despite the low track temperatures that made driving conditions quite difficult and exacerbated the lack of grip. Canada always produces an entertaining race and from what we've seen so far wear and degradation seems to be quite low, even with the ultrasoft."