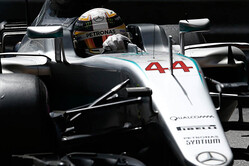 Having kick-started his title hopes into gear in Monaco, Lewis Hamilton is taking nothing for granted.

If anyone feared his rock 'n' roll lifestyle was getting in the way of his hopes for a fourth title, Lewis Hamilton's performance over the Monaco weekend should have allayed any doubts. Indeed, since his victory he has continued to live life in the fast lane, accompanies for much of the time by pop star Justin Bieber.

Other than a sparkling performance in Monaco, Hamilton was aided by Red Bull's pit stop debacle and Nico Rosberg's apparent no-show.

Having closed the gap to his teammate to 24 points, Hamilton is looking forward to racing on a track he loves, but is aware that he must take nothing for granted.

"This has been a naturally good track for me," he told reporters, "so hopefully I should be able to capitalise on that. But the weather is all over the place and I've had bad races here as well.

"I feel positive coming here," he continued, "but I am conscious how the season has gone so far. I am not arriving all excited thinking everything is going great again just because we have had one win. There are potholes we could easily manoeuvre but I'm equally conscious we could fall down them.

Asked if he feels different since Monaco, and whether Montreal, where he has won four times previously, gives him a psychological advantage over his teammate, he said: "No, not at all, I don't feel any different. Firstly you should never assume anything. That's not really the feeling I have this weekend. I know that it's a track that I've always been quick at.

"You look at the season and there'll be tracks where I've won there, been quick there, this one's always difficult but I have won here. There's other tracks that naturally come a little bit easier than others. This is a naturally good track for me, so hopefully I should be able to capitalise on that this weekend.

"But the weather's all over the place," he added, "and I've had bad races here as well, hence I arrive here probably feeling the same as all the other drivers.

"I arrived at the last race 43 points behind and I arrive here 24 behind so it just shows the goalposts are moving all the time," he concluded. "With 15 races still left, anything can happen."