Business as usual as Hamilton tops FP1 timesheets in Baku 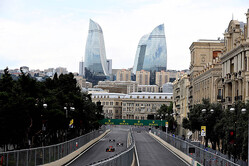 Ahead of today's opening session, the air temperature is 28 degrees C, and the track temperature is 42 degrees. Somewhat different to this time a week ago.

Needless to say, we all look forward to this session with a certain amount of trepidation. Claimed to be the fastest street circuit in motor sport the Baku city Circuit also features a number of very tight turns with barriers looking to be every bit as unforgiving as in Monaco, maybe more so, especially the section around the castle that comprises turns 8, 9 and 10.

A number of driver have expressed concern, as has Pirelli, but this is F1, where the mantra remains 'follow the money', and Azerbaijan has lots of it.

As one would expect, with experience of this demanding track limited to the simulator - though some drivers haven't even had that luxury - there are no reserve drivers on duty.

Furthermore, in lieu of the lack of data we can expect today to be busy.

The lights go green and Gutierrez has the honour of being the first driver to take to this new circuit. He is followed by Grosjean, Wehrlein, Haryanto, Magnussen and Nasr.

In no time at all, all but the Mercedes duo have made an appearance. That said, shortly after Hamilton and Rosberg head out.

Having completed that all-important exploratory lap, in the case of the Mercedes, Williams and Red Bulls duos, the drivers head back to the pits.

Teammate Hamilton is the second driver to post a time, the Briton posting a 55.710 as Rosberg improves to 51.430.

As Hamilton goes top (49.174), more drivers head out including Vettel and Raikkonen.

Massa goes fourth (53.535) Ahead of Button, Magnussen and palmer.

Having been the first on track, Gutierrez is also the first to take advantage of the run-offs, the Mexican going off at T15. Elsewhere, Vettel is the first driver to have a spin, the German doing a 180 in T16.

On board camera picks up on Button getting a nice tow from Vettel, the McLaren subsequently sweeping past the Ferrari.

There appears to be smoke coming from the right-rear of Verstappen's car.

Kvyat follows Gutierrez' example and experiences the run-off at T15.

Meanwhile, Hamilton has improved to 48.214 and Rosberg to 48.473. Bottas remains third, ahead of Button, Raikkonen, Verstappen and Perez.

Ericsson spins at T1 and then subsequently heads down the escape road at T3. Renault cannot afford any problems here as, following the incidents in Monaco and Canada, they have no spare chassis.

Whatever that problem was on Verstappen's car it appears serious, the Dutch youngster is out of his car and his crew have removed the floor.

Nearly all running thus far has been on the soft tyre, though Haryanto is on the medium.

Alonso improves to fifth with a (49.127), just two places ahead of his McLaren teammate.

As the camera picks up on damage to Nasr's car - one of the turning vanes is disconnected - Bottas reports "some smoke in his cockpit".

Forty minutes in and it's time to hand back a set of tyres to Pirelli.