Renault duo look ahead to Baku 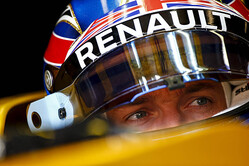 After starting at the back in Canada, Kevin Magnussen is focused on a better race weekend in Baku.

What's the focus for Baku?
Kevin Magnussen: A strong result would be nice. The Canadian Grand Prix wasn't a good one for us so let's get back to a solid performance. We've been making progress, even if it might not look like it from the outside, and I'm looking forward to learning a new track.

What are your thoughts on the Baku track?
KM: That's a big long straight! It's going to be interesting. It's a long track for a street course and there's quite a few interesting aspects about it. There's a really tight section which is going to be an eye opener the first time round and we don't yet know about things like the track surface, kerbs or bumps. There are a lot of walls there too. I'll be looking to stay away from those.

How would you assess your Canadian Grand Prix?
KM: It was a difficult one. Obviously, my weekend was undone when I hit the wall in FP3 and I had to thank all my crew for working so hard to get the spare chassis ready for the race. The race itself was pretty unfulfilling. We started on the soft tyres and initially we were looking pretty reasonable. When we changed to the ultrasofts we weren't able to find the pace we wanted so it was a hard second stint.

Jolyon Palmer is set for new challenges on the streets of Baku.

How have you prepared for Baku?
Jolyon Palmer: It's a brand new track so we don't have it on the simulator, so I've done a few laps on the F1 game! So I've had a little look in advance! My engineers have done their homework but the first real impression will be made when we're doing the track walk then getting laps on the Friday to learn the circuit. It'll be the same for everyone.

What are your first impressions of the circuit?
JP: I think it looks a cool track, there's some high speed sections - especially for a street circuit - and overtaking is a possibility. The crazy middle sector looks difficult with its undulation and the sector looks very tight. Any mistakes on a street circuit tend to mean you're into the wall, so you have to be alert.

It's looking hot in Azerbaijan; will you notice that in the car?
JP: Heat could play a factor for sure, and you do notice it in the car. We've not really had a very hot race as Bahrain was under the lights, and therefore cooler. On a street circuit it's hotter anyway because you're more sheltered so it'll be tough racing for the car and the drivers. Anyway, after the weather in Canada I'm looking forward to some heat!

What are the positives to take to Baku from Montreal?
JP: We made a step forward with the car, but some better luck and finishes would be good now. I'm happy with the progress being made for the rest of the season. Okay, I can't be happy at not finishing in Montreal, but the new engine is a step forward and it's worth a lot of time. The team are pushing hard, we're finding stuff on the car and the engine is working well. There's a little pain now, but I'm sure we'll be looking better for going through it.