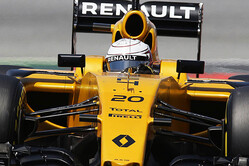 Kevin Magnussen has incurred a 5-place grid penalty after his team changed his gearbox.

The Dane, who was ruled out of qualifying following a crash he described as "weird", needed a new gearbox before six consecutive events had expired, a breach of Article 23.6 a) of the Sporting Regulations

"It was a pretty significant side impact," confirmed the team's Trackside Operations Director, Alan Permane, "which took out the wings, suspension and floor as well as damaging the gearbox and chassis.

"It was the damage to the chassis which meant we couldn’t qualify," he added, "and Kevin will race with the spare."

Magnussen is of the opinion that tyre temperatures were to blame for the mysterious crash.

"It was an out lap," he said. "We put on a set that I had run already and they hadn't been warmed up in the blankets. They didn't have time to get warm, and we just stuck them on and they were very slippery.

"It's weird," he continued, "because we had done it before and they had been alright. But maybe because the track temperature was so low it didn't work, and it caught me out. I was going out of the corner, hit a bump and it snapped massively... then I hit the wall."

The Dane will start from the pitlane.