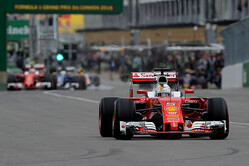 An hour before the session was due to start, Honda tweeted: "The cloud is back & it's expected to rain later. Cooler temps are good for the PU but not for the tyres".

However, it's no surprise. We reported earlier in the week that UBIMET, meteorologist to the FIA, claimed it would be changeable throughout the weekend. Sure enough, on Thursday the drivers were wrapped up to keep out the chill, whilst yesterday it was cool but with bright sunshine.

All of which makes the whole thing more unpredictable for the teams and drivers and more fun for us.

Though Lewis Hamilton was quickest in both of yesterday's sessions, it was the inconclusiveness of what was going on behind that confused, as Red Bull appeared to lose out to Ferrari.

Williams and Force India both looked good yesterday - despite Massa's DRS issue - whilst McLaren continues to impress. However, all that could change along with the weather conditions.

To further confuse the issue, the cool temperatures are creating a nightmare for the drivers in terms of the tyres, unable to generate heat into the softest compounds in the 2016 range.

Indeed, ten minutes before the start of the session, officials confirm that there is a 70% chance of rain.

The rear wing of Perez' car is smothered in flo-vis as the Mexican heads out, the search for information continuing over from Friday.

In no time at there are 18 cars on track, drivers keen to get some laps in before the (seemingly) inevitable rain. The last drivers out are Nasr, Kvyat and Hamilton.
"Some drops, some drops of rain," reports Haryanto. With all 22 drivers on track, there is a mixture of all three compounds.

Vettel is the first driver to miss the chicane at T13, though he won't be the last. Not by a long stretch.

While some drivers head back to the pits, possibly to change rubber, others stay out. Raikkonen is quickest with a 17.009, though at the second attempt Hulkenberg posts 16.916.

Ricciardo goes quickest (14.955) on supers, indeed, the quickest soft runner is Raikkonen (fifth) and the quickest ultra is Bottas, who goes fourth with a 15.678.

Caught out by a bump at the entry, Rosberg locks up and runs wide in the hairpin.

A 14.636 sees Verstappen go quickest on the supers, with teammate Ricciardo matching his time, to a thousandth of a second, moments later.

Interestingly, whilst Ricciardo has matched Verstappen's time exactly, so too Button matched Bottas' in FP2 yesterday.

Alonso is told the rain is breaking up and is still twenty minutes away.

Rosberg (ultra) leapfrogs his teammate with a 14.684 but moments later Hamilton responds with a 14.473, Verstappen having upped the ante with a 14.310.

Vettel, down in 12th, is the only driver on the soft rubber. Teammate Raikkonen, who has just switched to the ultra improves from 16.109, posted on the softs, to 14.594 to go third.

In quick succession, Hamilton and Rosberg miss the chicane at T14. The Briton, who took a pounding from the kerbs, asks his team if he might have incurred floor damage.

Such has been the amount of activity it's hard to believe we're on eighteen minutes into the session.

Vettel switches to the ultras as Hamilton closes t within 0.024s of Verstappen. On his first lap he is hampered by traffic and consequently can only manage 15th (15.699).

No such problems next time around, the German stops the clock at 14.139 to take the top spot.

"Jo back, reports a completely different car, in a good way," reports Renault, Palmer having improved to 15th with a 15.656. Teammate Magnussen is currently 18th.

Button and Alonso are 11th and 12th, both on the supers, and running together.

Kvyat, currently down in 17yh, has gone off into the escape road at T3, as reports that rain is falling begin to emerge.