The kiss of death for Arrivabene? 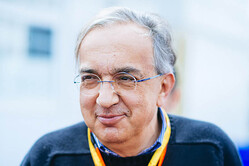 With Ferrari not producing the threat to Mercedes many expected - and the sport needed - the Maranello outfit, with the assistance of the Italian media, is doing what it does best, turning on itself.

Last week, in the wake of the (relative) disaster that was the Russian Grand Prix, and with Mercedes enjoying a (then) 81 point lead, reports in the Italian media suggested that Maurizio Arrivabene was in the firing line and would be replaced by James Allison with Toro Rosso's James Key being brought in as new technical director.

Just a couple of years after the last major clear-out, which saw some very good people dumped, Ferrari, having failed to achieve the results set by Marchionne looked to be heading for another 'night of the long knives'.

When asked about the rumours at the weekend, the highly likeable Arrivabene played up to the media suggesting that he was surprised that other than Allison, Key and Costa, one obvious name was missing from the list.

Asked who this might be, he replied "Tyrion Lannister!"

When his response was met with a blank stare, and a cry of "who?" he added, "Game of Thrones" with a grin.

How fitting that in the 'Piranha Club', only 48 hours earlier Daniil Kvyat had revealed that he was watching the popular fantasy drama when he'd received 'the call' from Helmut Marko.

Earlier in the week, at the launch of the latest from Alfa Romeo, Marchionne had said he wanted to see Ferrari winning, adding that he expected the first of those wins to come in Spain.

Yesterday, ahead of the race that was there to win but was lost, Marchionne was asked about the rumours surrounding Arrivabene's future with the team.

"They are complete nonsense, and by an extraordinary measure," he told reporters. "It annoys me because they are baseless and just create confusion in an extremely competitive environment. We don't need that."

Asked to confirm that Arrivabene has his full support, he replied: "Totally. Beyond any question".

And whilst some might see that as similar to the response given by most major sporting teams before their manager is unceremonially dumped, Marchionne also gave the thumbs up to his drivers.

"I still think we have two of the world's best pilots," he said. "We probably have the best pilots. I shouldn't be saying this with four drivers who are not ours in front of us. But I think we have great pilots.

"I think the team is in the best shape I've seen it in in a long, long time," he added. "So I think they need to continue to work diligently on fixing these issues."

Mind you, this was before the strategic disaster that was the Spanish Grand Prix.

Just as the plot of Game of Thrones twists and turns, leaving fans desperate for the next episode, so the Ferrari story has a few more surprises in store.

Indeed, with the dream team of Todt, Brawn, Byrne and Schumacher failing to win the title in their first four seasons, one wonders whether Marchionne might have fired the 'dream team' before that particular 'golden era' got underway.