Alfa Romeo return to F1 would be "complete package" 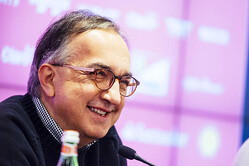 Speaking at the launch of the new Alfa Romeo Giulia in Italy, Fiat Chrysler Automobiles boss Sergio Marchionne has once again suggested that the legendary marque could return to the sport.

Whilst an engine supplier to numerous teams over years, including a title-winning partnership with Brabham, Alfa Romeo enjoyed two spells in the sport as car constructor and engine manufacturer.

Following its last foray, a disappointing six-year partnership with Osella whose best result was 5th in Dallas in 1984, rumours of a return have regularly done the rounds.

"It's incredible how the Alfa marque remains in people's hearts," he said. "For that very reason we are thinking about bringing it back, as our competitor, to racing, to Formula One. It's important for Alfa to return."

Speaking to Gazzetta dello Sport in February, he reiterated his desire to see the legendary name back racing, with F1 the only discipline in mind.

"In order to establish their sporting brand they must consider returning to Formula 1," he said. "They would probably work with Ferrari."

Asked if Alfa might consider WEC, and in particular Le Mans, he replied: "I would much rather put them in Formula One.

Tantalisingly, three months later the dream still flourishes, and whilst Marchionne insists a return is possible, much will depend on sales of the company's new road car.

"I do not know if Alfa Romeo will join F1, but if it does it will not be simply as an engine supplier, but as a full factory team, like Ferrari" he told reporters. "Though much will depend on the success of the Giulia and how many cars we sell.

"It will require serious funds," he added. "To invest in racing you need to sell a lot of cars and today we are only at the beginning of a long road."