Marchionne: It breaks my soul 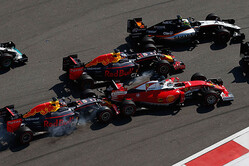 Speaking at the unveiling of the new Fiat Tipo in Turin, it was inevitable that Marchionne would be asked about Sunday's race in which his team's star driver, Sebastian Vettel, was out on the first lap having been punted from behind twice.

"We need to close the gap at the speed of light," he told reporters. "I was used to seeing a Ferrari with Michael Schumacher, so it breaks my soul to see a Ferrari that is suffering so much.

"Yesterday was a bad day and there is still much work to do," he added, "but I have every confidence in the team, we will succeed."

Other than Vettel's regular meets with Daniil Kvyat, the team has also suffered reliability issues as it struggle to keep up with Mercedes, far less take the fight to the German team.

In the wake of the Chinese Grand Prix, which he attended, Marchionne was said to be unhappy after seeing Vettel collide with teammate Kimi Raikkonen on the opening lap.

"He saw the race but in those circumstances, what can you do?" said team boss Maurizio Arrivabene. "You can say, many, many things, but there is nothing you can do, not the team nor with the car. When things happen like this you have to accept it, but of course he was not happy.

"And if he was happy, I would be asking myself... is this a real president or what?"