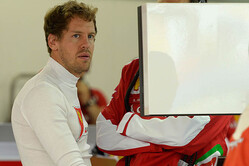 Sebastian Vettel has been handed a 5-place grid penalty after his team changed his gearbox.

The German, who was side-lined for much of FP2 following an electric problem which left him stranded on track, was subsequently informed that he would need a new gearbox the team discovering that it had been damaged in the first corner clash with Kimi Raikkonen in China.

The team monitored the unit throughout both sessions and eventually opted to replace it, a move particularly relevant given that Ferrari has spent more of its development tokens on an upgraded engine that will be available to both its drivers this weekend.

Deeming that Vettel finished the last race in Shanghai and this gearbox change was before the six consecutive events expired - a breach of Article 23.6a of the Sporting Regulations - the German was handed the penalty.