Mercedes spends its first tokens of 2016 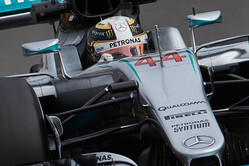 As Ferrari digs ever deeper into its token allowance, the Italian team having already spent 23 of its permitted 30, Mercedes, aware of the increasing threat from the Italian team, has spent its first tokens of the year.

The German team has admitted to spending two of its tokens on changes to its fuel system, though, unlike Ferrari, this will not necessitate a new power unit. Indeed, Lewis Hamilton and Nico Rosberg will run the same engines they ran in China, albeit with the tweaked fuel systems.

Customer teams Williams, Force India and Manor will also benefit from the changes.

The upgrade at Ferrari is to the internal combustion engine (ICE), hence the need for all-new units for both drivers.

Ferrari now has 6 tokens for the remainder of the season, whilst Mercedes has 11.