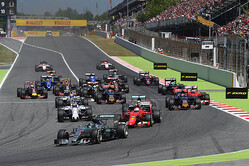 Agreement on the engine rule changes for 2017 will be delayed for a few more days yet as a number of members were unable to attend yesterday's meeting at Biggin Hill.

The F1 Commission, which is made up of FOM, the FIA, the teams, Pirelli, sponsors and race promoters, was to meet in order to rubber stamp the proposals of the Strategy Group which has agreed a plan that would see drivers limited to just three engines a year - thereby reducing costs - an increase to the fuel limit and rules which would close the performance gap between the different engines.

Whilst Red Bull is chomping at the bit for these new rules to be agreed (and implemented), Mercedes has made no secret of the fact that it is against the idea, certainly as far as 2017 is concerned.

However, it is understood that the no-shows were mostly race promoters who could not get to the meeting in time, as opposed to teams or engine manufacturers with an agenda.

Consequently, a e-vote is anticipated by the end of the week in order that things can move on.