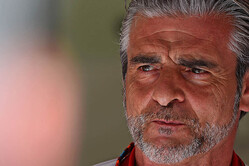 If you recall Sergio Marchionne's expression as Sebastian Vettel clouted teammate Kimi Raikkonen in the first corner at Shanghai - a look that could cause milk to curdle at fifty paces - you can imagine his reaction to yesterday's performance.

Speaking to the official F1 website, team boss Maurizio Arrivabene admitted that he has yet to talk to the company president.

"I have not spoken to him yet, but for sure he is not going to be amused," he said.

Asked about Vettel's reaction to the incident, once he'd returned to the pits, the Italian said: "Well, he was not exactly going ballistic. But of course everybody can understand that he was far from being happy!

"He took a DNF in a race situation just recently... and now a second time, and it has nothing to do with him. That is not really something that makes for a happy face.

"Sebastian wants to win, and if something gets in your way that is frustrating. We talked calmly when he came into the garage... but calm didn't mean happy!"

Told of Kvyat's claim that Vettel had slowed massively, Arrivabene replied: "of course - Kvyat hit him! What was Sebastian to do? Fly?"

Asked if there was anything on the telemetry to suggest the German had an isue which might have slowed him, again the Italian snaps.

"To turn to telemetry is not the right way to look at this situation. If we look at the images it is quite clear. Sebastian told me that he touched him one time – just at the beginning, and just a bit – but the second impact was quit hard. And if you touch someone one time and he slows down it does not mean that you have to touch him another time. We don't need telemetry to understand this.

"From my first day I have always promised that I will be transparent and honest. Last time in China I did not complain to Kvyat; I said to myself that he did his job. This time I can't find any excuse for what happened."

All that aside, fact is, Ferrari was never really going to trouble Mercedes too much in Russia. Asked if he was surprised by the advantage the German cars enjoyed at Sochi, the reply is simple.

"On the Sochi circuit yes, I was surprised. Believe me: I don't want this to happen again."

"If I have to define the championship, we love the fight," he continues. "We are looking for big challenges! What has happened is part of the DNA of racing. I don't think things can be explained as bad luck, there are mostly human mistakes behind the story.

"I prefer to have these kind of problems now instead later in the season. But of course we need to make sure that it doesn't happen again.

"Concerning the championship: we are not giving up! The team won't give up and we will put all our energy from now on into the next 17 races! There are still 425 points to be taken. So by only winning the next five races everything is wide open again. Nothing is lost and we're not giving up!

"We have to stop making any more mistakes from our side! Secondly I trust that our performance is much better than what we've shown until now. The characteristics of the tracks that are coming now – and because of the tokens that we've spent – will help us. Of course the others are not sleeping or waiting for us, so we have to fight."