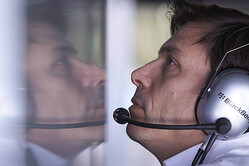 "Williams was very strong here, Red Bull not strong at all and Ferrari not as good as expected," he admitted. "I think this is a circuit where you have to get it right in terms of mechanical grip and aerodynamic downforce, engine power plays a role. So I would say the blip in performance we've seen from Ferrari is Sochi specific.

"If you remember last year there were races, Budapest... Singapore, where we struggled much more than others," he continued. "So I think we need to just keep our cool, continue to develop for each of the circuits and we learn as a team from the punches we received last year like Singapore and we've come out stronger.

"Sochi is one of those examples where we were able to apply the learning effects into the race setup and I am very happy about that.