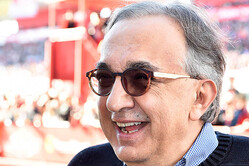 Ferrari has announced that following the retirement of its Chief Executive Officer, Mr. Amedeo Felisa, after 26 years of dedicated service, Sergio Marchionne will assume those responsibilities while retaining his current role as Chairman of the Company.

Mr. Felisa will continue to serve on the Board of Directors of Ferrari with a specific mandate as technical advisor to the Company.

"I have known Amedeo for more than a decade," said Marchionne, "and I have had the opportunity to work with him closely for the last two years. He is beyond any doubt one of the best automotive engineers in the world.

"During the last 26 years, he has worked tirelessly to fuel and guide Ferrari’s technical development, producing an array of cars which have set the standard for both performance and styling."

The Board of Directors confirmed it wanted to officially express its gratitude to Felisa for his contributions and its delight to be able to count on his services as technical advisor to the leadership team going forward.

The executive changes are effective immediately.