Hamilton hits out at stewards 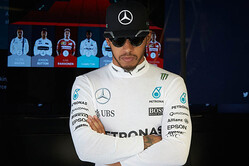 Lewis Hamilton has hit out at race stewards after being handed his second reprimand of the season.

The reprimand, handed to the Briton after he ran wide in qualifying and failed to follow the procedure instigated the previous night, was another episode in a difficult weekend for the world champion which saw him start the race from the fifth row after his second mystery engine issue in as many races.

Having been awarded a reprimand in Bahrain, when he was deemed to have reversed in the pitlane during qualifying, a third would mean an automatic ten-place grid penalty.

The Briton is not amused.

"I am aware that there is most likely going to be at least one 10 place penalty in the future because I have got one more reprimand to go," he told reporters.

"When I was in karting there was one steward, he was there just to make everyone's weekend a bad weekend," her continued. "Families would turn up and spend so much money to be there... and he was just there to ruin people's weekends. I've started to see signs of him."

Asked which reprimand particularly annoyed him, he replied: "Both of them!"