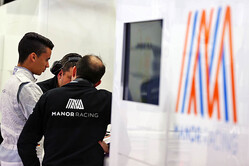 Pascal Wehrlein: "A disappointing result today. I got a good start and managed to avoid all the problems in the first couple of corners, then the first stint was quite good for me. I had a good fight with the Saubers but after the first pit stop they were in front of me. I tried to push hard to overtake one of them again but I couldn't manage it and I destroyed my tyres behind them so I had to box again. At the second stop we had a problem with the left-rear which lost us a lot of time but by then I think 18th was the best we could hope for. Now we have to focus on heading to Europe and what we can do to improve. My thanks to the team so far for a good first few races and their hard work."

Rio Haryanto: "Today I was unlucky and it's very disappointing, especially after I made such a good start, probably my best of the season so far. I managed to gain a couple of places, however when I got to turn 2 there were lots of cars fighting and the Force India of Hulkenberg spinning but I had nowhere to go. There was contact on the side of the car and quite a bit of damage, which meant I had to stop the car. After a good couple of days it's disappointing to finish the weekend in this way, but looking at the positives I feel we have been more competitive and I'm looking forward to continuing this at the next race in Barcelona."

Dave Ryan, Racing Director: "I wouldn't go as far as to say it was a race to forget, as we learn something from every lap, but it's fair to say we're heading home from Sochi disappointed. Rio was massively unlucky and as the replays show, he was just a passenger as Hulkenberg came spinning back towards him. From the footage we can see he was airborne, which together with the damage to his car tells us a lot about the force with which he was punted out of the race. Pascal had a good initial stint and enjoyed a couple of feisty battles for position but in pushing so hard the tyres were destroyed and we had to pit him again. At that stop we had a problem with the left-rear, which lost us a lot of time and so in the final stint it was just about bringing his car home. Now, with the first four races behind us, it's time to take everything we've learned so far and try to make some good progress with effect from Spain."