Haas on track to smash F1 value for money record 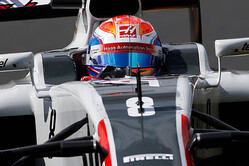 After just three races the Haas F1 team has already made its mark by storming to fifth in the championship with 18 points to its name and, remarkably, it hasn't got there through turbo-charged spending.

The usual rule of thumb in F1 is the greater a team spend, the greater its chances of success but Haas has challenged that convention with a new business model. In fact, according to the latest forecasts, it is on track to have a budget somewhere in the region of Manor which has only scored two points since it joined F1 in 2010.

Haas has taken full advantage of a new regulation which allows teams to buy more parts than before from established F1 marques. Buying in more parts reduces costs and Haas is using a Ferrari engine with a chassis made by Italian manufacturer Dallara. In itself that reduces research and development expenditure which, along with staffing and engine spend, is one of the biggest costs for any F1 team. For example, according to Force India's latest accounts, in the year-ending 31 December 2014 it spent £22.1m on staff and £20.6m on research and development.

No other F1 team buys its chassis from a third party like Haas but that's not the only difference under its bonnet. It is also the only F1 team to split its design and race operations which aren't just in different factories, they are on different continents.

The Haas F1 design division is based in North Carolina at the premises of its sister team, the championship-winning Stewart-Haas NASCAR outfit. This gives economies of scale as the facilities there already included a £35m windtunnel and 125,000sq ft factory. The icing on the cake is that the machine tools used by many F1 teams, such as Williams, are made by Haas Automation, the company founded by Gene Haas, owner of the eponymous F1 team.

In contrast, the Haas F1 race operations are based in Britain at Manor's former factory in Banbury. Haas got a good deal on that too when he bought it in 2015 after Manor crashed into administration under its former guise of Marussia. The British Haas division files accounts which give great insight into the financial benefit of the team's unique business model.

Its latest accounts are only for the five months to 31 December 2014 so you wouldn't expect them to reveal much about its present budget but in fact the opposite is the case. The accounts show that in those five months the team spent £10.2m which is not a great deal but there is much more to come.

They add that over the 3.75 years after 31 December 2014 the team has financial commitments £128m (€163.7m) falling due. It doesn't state what this will pay for but a good few clues suggest that it will cover the Ferrari and Dallara contracts.

Firstly, the accounts state that the amounts "have been shown in Euros as that is the currency in which the commitments are denominated". It also happens to be the currency used by both Ferrari and Dallara. The payments are also split into "commitments to acquire services" and "operating lease commitments" which would describe the purchase of the chassis design and the Ferrari engine lease. Finally it adds that payments under "operating leases over the next twelve months are £Nil." If they are the Ferrari engines that would make perfect sense as Haas did not start using them until this year, not 2015.

The payments to Ferrari and Dallara will make up the lion's share of Haas' costs with the main exception being payment to staff. So how does this compare to Manor? The accounts for Manor Grand Prix tell all.

Between 2009 and 2012 Manor employed an average of just 79 staff whereas Haas is understood to have around three times that number on its books. The total staff costs for Manor for the 3.75 years from 2009 come to £22.7m so to make a fair comparison with the core Haas costs, that sum should be tripled and deducted from the £190.7m total. This brings Manor's spending to £122.6m which just so happens to be almost identical to the £128m of Haas.

The full picture will come to light when the team files its accounts for the following years and, in the meantime, this can only be considered a guideline. That's because it doesn't include costs such as travel, equipment hire and lease of premises but they only comprise a tiny percentage of the total. The bulk of the costs for any team are engines, research and development and staff which are all factored into this forecast.

Nevertheless, the benefit of having a low cost base is eliminated if the company still has insufficient revenue to cover its outgoings. That shouldn't be a problem for Haas. Although the team has few sponsors so far, except for Haas Automation, in an interview before the start of the season Gene Haas said "there's a fair amount of interest in there. I think there's a little hesitancy until people see the product. You don't want to sell it at for sale prices." Now that brands have seen the team perform its hard to imagine sponsors not joining the squad soon.

Then there's the prize money which will be paid out after the end of this season and Haas is currently in line for around £50m if it remains in fifth place. It is down to smart strategy.

In the season-opener in Melbourne, Romain Grosjean came home in sixth for Haas making it the first F1 team for 14 years to score points in its maiden race. Grosjean gained an advantage from being switched to medium tires following an accident which knocked his team mate Esteban Gutierrez out of the race and led to a red flag. Since the flag came out before Grosjean had gone into the pits he was able to change his tyres without needing to make a stop during the race.

Some said that luck played a part in it but in fact it was thanks to an inspired race strategy masterminded by Haas' Principal Race Engineer, Ayao Komatsu. The race strategy department at Haas reports to him and he explained in a recent interview that "[during the race my duties are] strategy and decision making." He added that doing his job well requires being able "to get the best out of people. To be able to make a correct decision under pressure. To be proactive." He proved how capable he is at that in Bahrain by deliberately sacrificing Grosjean's eighth place on the grid for a new set of tyres. Komatsu reckoned that the new tyres would pay off more than the eighth place and he was right.

Force India's Nico Hulkenberg, who was in front of Grosjean, was involved in an incident on the opening lap and had to pit. From then on Grosjean was able to run at his desired pace and finished the race in fifth place so Komatsu's bet paid off.

Although the team won't receive prize money this season it is already reaping the rewards of these clever strategy calls. Recent research shows that the Haas brand has already got exposure through F1 worth an estimated £9.8m. This is the amount that the brand would have to pay to buy a similar amount of on-screen exposure to that which it receives through F1.

It peaked at £4.7m in Bahrain and that alone is almost equivalent to the exposure value of the Renault brand in the first three races combined. Haas has so far got exposure worth more than the total earned by HRT, one of the three previous new teams to join F1, in its début year. The research shows that if Haas' performance continues as it has been doing it is on track to earn exposure worth an estimated £70m by the end of the season. If it can pull all this off then it may well have found the winning formula.