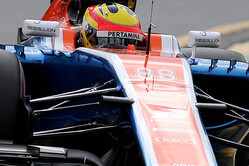 This weekend we'll be snaking our way around the Olympic Park in Sochi, host city for the 2014 Winter Olympics, at Round 4 of the 2016 FIA Formula 1 World Championship, the Russian Grand Prix. Once again this is virgin territory for Pascal Wehrlein but familiar asphalt for Rio Haryanto, who has raced here twice before in GP2. It's just seven months since we last raced at this challenging 5.848km circuit, as a calendar shift sees Sochi switching from an autumn event to spring. Let's catch up with our drivers and Racing Director Dave Ryan.

Pascal, three brand new circuits ticked off your list. What are you expecting from the Sochi Autodrom?
Pascal Wehrlein: "Well, we probably won't have time to ski, although I hear that's still possible. There's plenty of snow on the mountains though. Sochi Autodrom is a great-looking track; I can't wait to try it out on Friday. It's essentially a street circuit and they're always fun to drive. This one is quite fast and having the Olympic Park in the middle of it is something a bit different. For us, hopefully we have been able to continue improving our set-up so we can unlock a little more of the car's potential. There's still plenty of work to do there."

Tell us about that process?
PW: "Well, fundamentally we have a good package and every race we're making progress, but it's still very early days. There's plenty we can do in every area to improve and find more performance. I'm learning a huge amount with each new race and we're really starting to work well together as a team, so it's a combination of factors that will help push us forward. It's exciting to see how we can build from here."

Rio, we saw you race here in GP2 last season and come agonisingly close to a win!
Rio Haryanto: "Yes, it would have been my fourth win of the season. I took the lead on the final lap but in the end I had to settle for second after I was judged to have overtaken under the Safety Car. It would have put me in contention for the title too. Still, it was a good race for me. I'm looking forward to getting a feel for the track in an F1 car."

We hear you've been heading back to Indonesia after every race. What have you been getting up to?
RH: "Well, the Asian races have made that pretty easy to be honest. Once we get into Europe I'll have to cut back on my trips home. In the early part of the season though, I've had a huge schedule of sponsor appearances and fan events, which I've been happy about. I waited a long time for this moment so the least I can do is reward the support of the fans back home, who've been incredible. The climate is also really good for training. The heat and humidity mean I'm pushing myself to the limit, more so than ever before. After Russia, I'll be basing myself in Spain a little more, which is a bit like a second home for me and my trainer is Spanish."

Dave, what are the big challenges for the team in Russia?
Dave Ryan: "This race brings the opening run of long-haul events to a close, together with the logistical demands that go with that. On the plus side, tyre degradation at this track should be less severe than at the past three circuits. We have plenty of data from the two occasions that the team has raced here but this event has moved from its previous autumn slot to April so we're looking at lower temperatures and maybe rain to spice things up a bit. It's a really interesting circuit; a fast-flowing, medium-high downforce track that's a combination of street and permanent circuit. It's quite a technical challenge, with a couple of notable characteristics, in particular Turn 3, the multi-apex left-hander, and quite a few off-camber corners. We're looking forward to getting to grips with it."