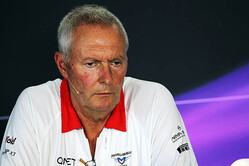 Toro Rosso has announced that, with immediate effect, John Booth will begin working with the team on a consultancy basis in the role of Director of Racing.

The Englishman, who has wide ranging experience in all forms of motorsport, including his time in F1 with Manor Marussia, will take up his responsibilities as from this weekend's Russian Grand Prix.

"It is a great honour to join such a well-established and competitive team as Scuderia Toro Rosso" said Booth. "It is a team that has achieved so much in a relatively short space of time. I am looking forward to getting started and working with Franz and the team this weekend in Sochi."

"I have known John for many years and I am delighted to welcome him to the team," added team principal, Franz Tost. "Formula 1 is becoming ever more complex, with recent changes on the tyre front, car set-up, radio communications and so forth. Therefore, having a competitive car and talented drivers, both of which we have, on its own is not enough. With his vast experience I am sure John will help the team raise its game and become a more effective force over a race weekend."