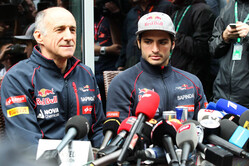 We can't remember exactly where we saw it but the headline of the weekend - on so many levels - has to be 'Sainz be praised', in relation to the excellent news that the Toro Rosso driver had come through his horrendous FP3 crash virtually unscathed.

After the long, anxious wait as he was extracted from the car, the sense of dread not helped by the lack of TV replays or radio comms, we could all breathe a massive sigh of relief on seeing the youngster give the thumbs up as he was stretchered into a waiting ambulance.

Nonetheless, the accident raises serious questions in terms of such incidents and once again has the pro-closed cockpit lobby taking the high ground.

Whilst in no way wishing to compare this weekend to Imola 1994, we're sure the sport will be glad to leave Sochi after what has, thus far, been a difficult weekend.

Admittedly, the rain couldn't be avoided, but the diesel spill and the subsequent issue with the Tecpro barriers... and all for the sort of crowd numbers we have grown used to as Bernie Ecclestone spreads the F1 net ever further from its heartland.

The numerous thrills and spills - see what we did there - have resulted in a serious lack of running, team programmes compromised at every turn.

Though qualifying wasn't quite the lottery we expected, we are sure things will be different today when the lack of preparation on Friday and Saturday morning becomes evident. 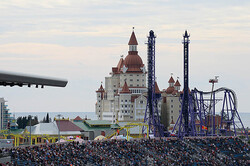 Despite it all, Mercedes, which can wrap up the 2015 constructors' title today, hogs the front row - for the 30th time in the German marque's history - but let's not forget Niki Lauda's pre-Sochi concerns nor Toto Wolff's claim that degradation is an issue here.

Though we expected to see Ferrari as the biggest threat to Mercedes, especially in light of Singapore, it is Williams which appears to have the edge, though a mistake by Felipe Massa meant the Brazilian didn't make it to Q3 and consequently Valtteri Bottas takes on the Scuderia single-handed.

Whether the Italian cars will fare better in race conditions, or whether, like their rivals, the lack of Friday's race simulation work has put them on the back foot, remains to be seen.

No disrespect to Force India, but even the Silverstone team must be surprised to see its drivers line up sixth and seventh, whilst Romain Grosjean gave another 'beyond the call of duty' performance in the Lotus.

In a disappointing 11th and 12th, the Red Bull duo will no doubt be glad to be on track and away from the constant questions about their - and their teams' - future, Daniil Kvyat, in particular, hoping to put on a decent show in front of his home crowd.

Just over two hours before the race, Toro Rosso announced that Sainz has been given the all-clear, however, the team's hopes will surely rest on the shoulders of Max Verstappen today.

Sainz starts from the back of the grid, along with countrymen Fernando Alonso - contesting his 250th GP today - and Roberto Merhi.

The McLaren has looked a bit better this weekend, but nothing special. Indeed, another 35-place grid penalty for Alonso continues the farcical nature of it all.

Sauber has had a pretty anonymous weekend, possibly keeping out of the spotlight after instituting that EU investigation into the sport - along with Force India - though Felipe Nasr did well to qualify 12th.

Tyres, like Singapore and other street tracks, are soft (prime) and supersoft (option), though this is a step softer than in 2014.

Because the teams did not complete many laps of dry running in free practice, it's hard to have a precise indication of strategy. However, most will probably choose a one-stop strategy owing to the low wear and degradation levels. In which case, the fastest strategy would be to start on the supersoft and then switch to the soft between laps 18 and 22.

However some teams might not discount a two stop strategy, especially if race conditions turn out to be warmer.

There are two DRS zones, the first on the pit straight and the second on the long sweep between T10 and the infamous T13.

Following Suzuka, one of the big questions is whether, having taken pole, Nico Rosberg can successfully fend off teammate Lewis Hamilton at the start. The Briton doesn't need to win - though he'll want to - whereas the German does need to win.

The pitlane opens and one by one the drivers make their way to the grid.