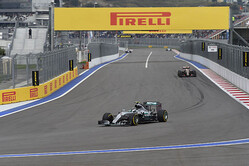 Nico claimed his third pole position of the season at the 2015 Russian GP and his second in a row after Japan. Lewis secured P2, 0.320 behind Nico, to make it an all-Mercedes front row for the eleventh time in 2015. Both drivers did a single run in Q3 and set their best times on the second flying lap with neither able to improve on their fourth flying lap. The drivers completed one run in Q1 (prime), two in Q2 (option/option) and one in Q3 (option).

Nico Rosberg: It was a tricky session today as we were not able to practise a lot yesterday. We had to guess what the right set up for this track will be. But we nailed it and had a nearly perfect lap in my first run in Q3. So I'm quite pleased with that. I'm in the best possible position for tomorrow, which is great. I really hope for a clean race, it will be a great battle with Lewis.

Lewis Hamilton: Everyone was in the same position today with the limited practice. I didn't get a hooked-up lap together but Nico did, so well done to him. It's going to be a long race tomorrow though, so hopefully I might have a chance. There's a long run down to Turn Two, so we'll both be studying the line to take tonight. Maybe I can get a good start, we'll see. We haven't done a lot of laps, so I'm not really sure what our pace is like compared to the others. Our goal in the race as always is to finish well for the team, so we'll be trying to do that.

Toto Wolff, Head of Mercedes-Benz Motorsport: A great job from Nico to take a second pole position in a row; he has been quick all weekend and kept that going through qualifying to take P1. Lewis was a few tenths off Nico's time but I am sure he will be feeling confident for tomorrow's race. It was a complicated session but the guys made the right decisions and did a good job to understand how to get the best performance from the tyres in tricky conditions. For the race, it will be a bit of a journey into the unknown because we have not had much running this weekend. This track is tough on the rear tyres and everybody will be watching the tyre degradation carefully. We're starting from the best possible position but we need to take everything one step at a time.

Paddy Lowe, Executive Director (Technical): First of all, congratulations to Nico - he was ahead during each part of the qualifying session and put in a great lap in Q3 to take pole. Lewis didn't quite match that time, but will start from P2 to make it an all-Mercedes front row. It was quite a tricky session for us to manage because of the nature of this circuit. The track surface is very smooth and that makes the tyre warm-up the dominant factor for setting a good lap time. After we lost Friday practice for meaningful running, we spent most of Q1 and Q2 experimenting with run profiles to decide whether the first, second, third or fourth timed laps were quicker - and, of course, we were observing our competitors' experiments, too. The main difficulty was that there was not enough time to do two runs of two timed laps in Q3 with both cars, which looked like it would have been our preferred solution, without the performance penalty of fuelling for the whole session and carrying the additional weight on the first run. So we chose to do a single run with each car, setting times on laps two and four. This was sufficient to lock out the front row but neither driver improved on their second lap. Now we look forward to tomorrow's race, which will be a challenge for everybody after the limited running we have done this weekend. But we will be aiming to capitalise on our front row starting positions.