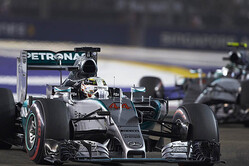 With Pirelli still smarting from the public criticism it received in Belgium, and Mercedes similarly hurting following its nightmare weekend in Singapore, it was obvious that the conspiracy theorists would have an answer.

One of the stranger rumours doing the rounds post-Singapore was that Mercedes had been given the wrong tyres, a claim even Toto Wolff paid momentary lip service to. "I'm not saying that it happened, just that I thought it," he admits.

Consequently, Pirelli has issued a brief statement vehemently denying the claims. Insisting that the tyres, which are produced in Izmit in Turkey, are embedded with traceable bar codes, the Italian manufacturer says the system is tamper-proof and random.

"Once the production run for each grand prix is finished, the Izmit factory sends a list of the bar codes to Pirelli's logistics and distribution hub at Didcot in the United Kingdom," it added. "There, Pirelli's system randomly groups the bar codes into blocks of four, comprising two rears and two fronts, which will make up a tyre set. This list of blocks is then sent to the FIA. The FIA subsequently allocates blocks of bar codes - and therefore sets of tyres - to each individual car at random."

"Deciding which tyres are allocated to which teams, or when they are used, is a job taken care of entirely by the FIA once the tyres have left the factory," added Paul Hembery. "It is just another way that impartiality can be ensured among all the teams, which has always been a huge priority for us as exclusive tyre supplier."