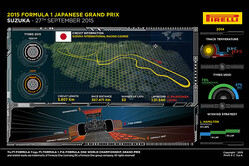 Following the street circuit at Singapore, where the two softest tyres in the range were nominated, Formula One heads directly to Japan this weekend with the two hardest tyres selected for Suzuka: P Zero Orange hard and P Zero White medium. This is because Suzuka contains some of the fastest and most demanding corners in Formula One, such as the legendary 130R, which forms part of Formula One history. As a result, some extremely high-energy loads pass through the tyre, leading to heat build-up on the tread. This requires the most durable compounds in the range to maintain consistent grip. Owing to Suzuka's notoriously variable weather, the Cinturato full wet and intermediate tyres may be seen as well over the course of the weekend, although this year the Japanese Grand Prix takes place a week earlier. The teams have to basically be ready for anything, at a venue that has frequently crowned champions in the past.

Paul Hembery: "Suzuka is one of the most aggressive circuits we face on the Formula One calendar from a tyre perspective: it's right up there with Silverstone and Spa. There's been some resurfacing in recent years that has taken away a bit of the asphalt roughness that it used to have, but this does not diminish the overall challenge of Suzuka in any shape or form. It's not unusual to face extremes of weather in Japan: either very wet, or dramatically hot. We've seen both over the years - and quite a few conditions in between - so it's a very tough circuit all round. The drivers absolutely love the experience of driving here, and over the course of the weekend we are always privileged to meet some of the most passionate and dedicated fans we see anywhere all year. They are a vital part of what makes coming to Suzuka so special. Of course, like everybody else, Jules Bianchi will be in our thoughts more than ever over the Japanese Grand Prix weekend."

Suzuka is a fast and flowing circuit: to the extent that it has very high lateral energy loads (through the fast corners) but one of the lowest longitudinal demands of the year, underlining the fact that there is relatively little acceleration and braking. Instead, the drivers maintain a high speed throughout the lap, with the very long corners such as 130R (named after its radius) and Spoon putting sustained loads through the tyres. 130R is taken flat-out in top gear at speeds in excess of 300kph, generating the highest continuous g loading of the year.

While Suzuka has been re-asphalted recently, the surface remains quite abrasive. There is a relatively high degree of track evolution over the weekend: during Friday in particular the circuit is usually quite ‘green', leading to a risk of graining if the track does not provide optimal grip.
Suzuka is traditionally high when it comes to wear and degradation, making tyre management even more important than usual. With the risk of rain and safety cars, plus several overtaking opportunities, this is one of the circuits where strategy options are extremely open, depending on circumstances.

Last year, the race was started behind the safety car and ran in wet conditions from start to finish. Lewis Hamilton won for Mercedes from second on the grid, starting on the Cinturato Blue wet tyres and then stopping on laps 14 and 35 for intermediates.

Expected performance gap between the two compounds: 0.6 - 0.8 seconds per lap.