Hamilton suffering a crisis of faith? 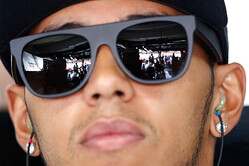 Yesterday it was Jenson Button retiring today it is the Briton's former McLaren teammate at the centre of British media attention.

Following a disappointing weekend in Singapore, which saw Lewis Hamilton post his first DNF since Belgium last year, when he suffered accident damage after a clash with his teammate, most are confident that it will be business as usual in Japan where the Briton and his car should enjoy similar dominance to that witnessed in Italy.

However, the British media has the Mercedes driver feeling far from confident.

"I'm hoping it's a one-off but it was a strange weekend to say the least," he adds. "Our car has not got slower. I told my engineers I would like some information about what they think it was but there's not a lot of time before the next race."

However, it's not all doom and gloom.

"Before my problem with power loss, I was absolutely sure that I would have undercut at least two of the cars ahead of me," the Independent quotes him as saying. "In my mind, I thought I might have the chance to win.

"Personally, I'm very chilled about last weekend," he insists. "I was there to do a job, and I'm fully aware that you can't win them all. Shit happens. I'm very fortunate with the success we've had, and pleased with the job I did. I out-qualified my team-mate and was ahead of him in the race before the car broke. That's the first time that's happened in a long time, and I didn't lose a huge amount of points. I take the glass half-full view. It could have been a lot worse."

Indeed, at a time when some conspiracy theorists ponder whether the downturn in form is anything to do with the tyre pressure issue in Italy, the Guardian cleverly adds another suggestion to the media mix, the possibility of Mercedes being "given inferior tyres".

"I don't believe so," says Hamilton. "Why should I think that? I've never heard of that in Formula One. Has it happened before? I've never seen it. I don't think so."