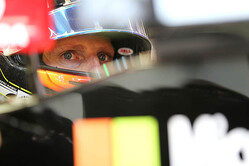 Pastor and Jolyon ran a variety of assessments and simulations in the morning session using Pirelli's medium (white) compound tyre. Jolyon conducted a front wing evaluation programme as well as other set-up work. Pastor and Romain continued assessments in the afternoon, using both the medium and soft (yellow) compound tyres.

Romain Grosjean: "We had a pretty good afternoon; the car was working well especially on the shorter runs which saw us set the seventh fastest time. We have a little bit more work to do on our longer runs, which we'll do overnight and see where we are on Saturday. Generally we're happy with what we have done so far. For qualifying, we should have a good fight on our hands with Force India, Williams and Ferrari. And the rain - if it comes - could be challenging as we run such low downforces, which makes the car very slippery in the wet."

Pastor Maldonado: "It was a good start today, we have a decent balance with the car and we still have more potential to get for tomorrow. We also have plenty of data to analyse for the new Pirelli tyre pressures ahead of qualifying and especially for the race on Sunday. It'll be important to take good care of the tyres during the Grand Prix. For qualifying, it's difficult to say as everyone is quite close behind Mercedes. We will hard push as always."

Jolyon Palmer: "It was a tough session as I only got a couple of laps on the first set of tyres as we carried out aero mapping work before being interrupted by a red flag. That meant I had a lot to do once the session resumed and we did manage to get a good number of laps in. The purpose once again was to work on the new front-wing which we brought to Spa and trying to make more progress with it. It was a useful session but there is more work to be done."

Alan Permane, Trackside Operations Director: "It's been a productive and competitive day. We carried out further aerodynamic work on our new front wing with Jolyon and made some alterations as a result which are positive for the future. With Pastor, we focused on fairly long runs during FP1, while our traditional tyre programme and brake assessments were carried out in FP2 with both Pastor and Romain. Both cars are working well so far and the drivers are pretty happy. We hope to make more progress tomorrow and qualify well into the top ten like we did in Spa."