Red Bull and Renault heading for an early divorce? 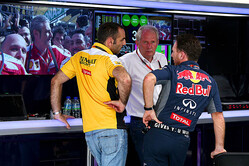 The summer break has clearly done little to save the 'marriage' as Red Bull seeks early split from Renault.

Though legally tied to the French manufacturer for another year, Red Bull is growing ever impatient and whilst threats of leaving the sport have subsided the Austrian outfit now clearly eyeing a relationship with Mercedes.

Uncharacteristically, as rumours sweep the Spa paddock that Red Bull has already called in the lawyers and served notice of its intention to end the relationship, team boss Christian Horner was saying little.

"As far as anything is certain in Formula One, we have an agreement with Renault and within that agreement there are certain obligations and parameters from both parties," he told Auto Motor und Sport.

Asked whether his team will be running Renault power units in 2016, currently the final year of the partnership, Horner said: "What is certain in Formula One?"

Mercedes has opted to sit on the fence, Toto Wolff admitting that he does not want to go the Ashley Madison route and begin an illicit relationship with the Austrian team.

"At the moment it's not in our hands," he told Sky Sports F1. "They have a relationship with Renault.

"The situation is that we will not interfere with an existing relationship," he added. "That is not the way we approach business in general. Until it is resolved between the two parties we will not even start any discussions and because it hasn't reached that line, and because the complexity is quite large with many decisions to be made, that is where we are."

The situation is further complicated by the fact that Mercedes might not want to provide a major rival with power units that could challenge its own superiority. On the other hand, as well as bringing in welcome revenue, a competitive Red Bull might hold off the Ferrari challenge.

Furthermore, as rumours of Lotus having its cars and equipment impounded at the end of the weekend, the result of legal action by former test driver Charles Pic, the Enstone outfit's future is far from settled and whilst there is talk of a buy-out by Renault this might not happen until 2017, if at all..

All in all, a complicated and messy affair, but isn't divorce usually that way?