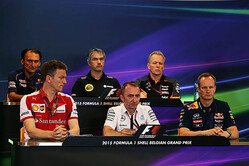 If I could start with a question for all of you: coming in next year are further restrictions on driver aids and team radio assistance. Can you give us your thoughts on the difference it will make that fans will be able to appreciate? James, why don't you start?
James Allison: Well, if it has its intended effect it will make it so that the drivers who are most on top of their game can do a better job than the ones who needed to be led a little bit more by the hand. I think on the whole the drivers are all pretty good in Formula One so I imagine that within six months or so, or maybe sooner, it will feel very much like it did before but maybe in the transition to that there will be a few mistakes made and maybe some interesting events as a result.

Giampaolo?
Giampaolo Dall'ara: Yeah, well, I can tell you about the engineering side of it: it changes quite a bit the way we work, approaching the issues involving the driver more and the engineering side of the car. Eventually I think the result is what James has just mentioned. The driver will be more in charge of what he is doing, also on aspects that today maybe are driven from the back. Judging then the perception on the spectators, this is very difficult from where I sit, honestly.

Thank you. Paddy, there is obviously a big list of things you can and can't say on the radio. How do you remember all those things?
Paddy Lowe: I know. It's actually quite tricky. We police ourselves on the intercom. People often ask: “Can I say that? Can I say that?” But yeah, we will work our way through it and get used to it in time. As the other two have said, I think we will see a little bit more variability. But the big thing for me is that to a larger extent if a driver has a good or a bad start that will be down to his skill and less dependent on the team's performance on configuring the start.

Nick, a step in the right direction?
Nick Chester: I think everybody wants to see the drivers being in charge of their own starts, so I can see why it has come in, but I'd echo the comments earlier, I think people will get used to it very quickly. There might be a few little mixes early on but it will settle down fairly quickly.

And Paul, looking ahead to next year, obviously more sweeping changes as well, what difference will that make?
Paul Monaghan: I think you'll see a little bit more variability. We'll see the odd fluffed start; we'll see a bit of a shuffle up of the grid order approaching turn one. Mid-race I think when the drivers get used to it and depending on how the teams treat the level of automation there will be subtle differences maybe in ultimate performance you can extract from the car, after that I think it will settle out. What the fans will see? A little bit at the starts maybe but once you're in the race I'm not sure there'll be much other than less radio traffic.

A final thought from you Andrew?
Andrew Green: Yeah, I'm the same. I think within a few months the differences will be quite subtle. Like people have said, maybe a few fluffed starts. But the main thing is that the radio is going to be quite quiet.

OK. Coming back to you then James. Back on top with a victory in Hungary for Sebastian, but another technical problem on Kimi's side. What was the reason for that and what expectations do you have both in terms of performance but also reliability for the remainder of the season?
JA: I don't think we tend to go into the nuts and bolts of why our bits and pieces fail on our car but enough to say that we had a problem with the ERS system that meant that we were unable to continue in the race. Initially we lost a decent amount of power and then thereafter unable to continue. I hope we have put that behind us with the modifications that we've made during the last few weeks and for the remainder of the season, I think it's going to be a bit like the first half. We're not a bad car, but we're not as good as these guys [Mercedes] and if they have a bad weekend while we're having a good weekend then we can upset the apple cart a bit and if things pan out more normally then we tend to come in behind them. So let's keep our fingers crossed that they have a bad weekend and we do the opposite.

Paul, if James is saying the Ferrari's not a bad car compared to the Mercedes, it looks as though the Red Bull has become a substantially better car in the last month. Obviously a double podium in Hungary. Big progress on the chassis side. Was that a question of new parts or was it just, as much as anything, unlocking the potential of what was already there?
PM: It's a combination. We have some new parts there. We've improved the car a little bit in many areas, not just, shall we say, focussed on one of them. It's starting to show benefits. We've seen the benefits in increments and in Hungary it was more complete, shall we say. It was nice to be challenging at the sharp end of it again and I think at the moment we have to accept Mercedes have a bit of a performance advantage. Maybe they have a bad weekend, maybe we have a good weekend and then I think it's all up for the fight, isn't it? We'll put ourselves in there such that, if we can benefit from circumstances then we're there to do so.

Andrew Green, coming to you from Force India, talking about upward performance curves, you're certainly a good example of that with Force India. New car, of course, introduced a few rounds ago certainly contributed to that. What do you think is possible for the rest of the season for your team?
AG: Well, I mean we've bought new parts here, we've got new parts coming for the next couple of races. I think once we get to Singapore, we'll start to begin to understand where this car actually sits - that's where we plan to bring the last of this current suite of updates to the track. We're looking to start moving ahead of the guys behind us, obviously for sure, and looking to see if we can stay on the coat tails of Red Bull to a certain degree. If we hadn't had the issues in Hungary, we were racing well in Hungary. Hungary was a shock to us, gave us a bit of a shot in the arm. We've learned from that, we're moving forwards. We've got some exciting races coming up for Force India.

Paddy, first of all, any update on the cause of Rosberg's tyre failure from your side. What did you see on the screens?
PL: I think we've really only seen the same the same thing that everyone else has seen on the video. So very unusual situation where there seemed to be some bits of tyre structure coming out up to a minute before the actual terminal failure of the tyre. Not something I've seen before. So Pirelli have obviously taken the tyre away to analyse. I think we'll have to wait to see what emerges from that. We're double-checking everything to do with the car as well, obviously. But yeah, that'll be something we'll work through the evening.