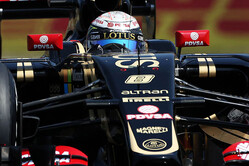 Lotus F1 Team enjoyed their best qualifying session of 2015, with Romain Grosjean fourth fastest and Pastor Maldonado eighth at an uncharacteristically hot Spa-Francorchamps. Both drivers sailed through the first two qualifying sessions to the final top ten, with Romain then putting in the better lap. The joy of his fast lap is tempered slightly by a five place penalty on tomorrow's grid after his gearbox was replaced following a power outage at the end of yesterday's FP2. Romain will start from P9 and Pastor from P7.

Romain Grosjean: "Today's result is more than we had expected! I gave everything that I had in the car for that last lap, I pushed hard from the beginning to the end. Being P4 is a really good effort. It is just so fast here. Going through Eau Rouge at 300kph, it feels like being a kid at Christmas. Every time you drive through it you have a smile on your face, it is so nice driving on this circuit. We will start from P9 tomorrow with the grid penalty and we will see what we can achieve from there. We have been better in race pace than qualifying pace so with a good set-up and hopefully some nice overtaking manoeuvres we can score some good points on Sunday."

Pastor Maldonado: "At the start of the weekend we didn't have the best pace so the team has done a really fantastic job to get on top of the car and give me and Romain something really strong to use for qualifying, which is thanks to everyone's hard work. I think we will be competitive tomorrow and with the right strategy we should be able to achieve something pretty good."

How was qualifying for the team?
Alan Permane, Trackside Operations Director: It was a good performance and what we wanted. There is a downside with Romain's gearbox penalty which means we won't enjoy the full fruits of his fast lap, but we're well-placed with both cars for tomorrow's race.

What are the considerations for tomorrow's race?
AP: The practice sessions we've had here have been somewhat interrupted so we don't have as much long-run data as we would otherwise. We undertook some race work in FP3 this morning where we were pleased to see that the changes we'd made overnight had improved our rear stability and improved our degradation. Our expectation is for a strong race with both cars scoring well.