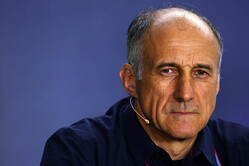 As early as March, following a disappointing season opener in Melbourne, there was a question mark over Renault's future in the sport.

Still hurting from the public battering Red Bull gave the French manufacturer after just one race, Renault Sport F1 managing director Cyril Abiteboul warned that his company was considering walking away from the sport, though on the other hand it could get even more involved by buying a team.

At that time, it wasn't Lotus - now using Mercedes power units - that was being linked with the French manufacturer but Toro Rosso. Indeed, the Faenza outfit's boss, Franz Tost, was all for the idea.

As time went on, and the public bickering continued, speculation over a potential buy-out increased, fuelled by the continued presence at races of Gerhard Berger, former F1 race winner and one-time co-owner of the Faenza team and even claims, from Red Bull's motorsport consultant, Helmut Marko, that Toro Rosso could run a (yellow) Renault livery.

However, as Renault continues to ponder its future, its attention now clearly drawn to the ailing Lotus, Tost admits that it is unlikely that his team is in the French company's sights.

"I can only say what has happened in the last months in connection with Renault and Toro Rosso," he told the official F1 website. "Yes, they have visited us in Faenza and Bicester but in the last weeks it has been quiet, so I assume that they have decided to buy another team.

"How that would influence Toro Rosso we have to see," he added. "We have to wait for Renault's move and announcement. Then we have to discuss a programme that fits the requests and needs of Toro Rosso."