Red Bull and Renault heading for a messy divorce? 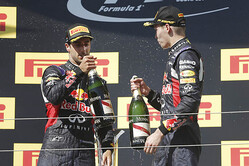 Second and third in one of the best races in living memory should be enough to put differences aside, at least for the sport's annual break, but the fact is the relationship between Renault and the Red Bull teams faces a summer of discontent.

Ahead of the weekend, Christian Horner said it would be Sochi in October before he was expecting an update from Renault, and by that time the sweet, welcome taste of yesterday's podium Champagne will have soured.

As Renault ponders whether to leave the sport entirely or get even more involved, possibly buying back the team it sold just a few short years ago, the French manufacturer seemingly getting more negative publicity now than the positive publicity it should have been getting whilst winning as engine supplier and entrant, the breakdown of the marriage is every bit as messy as one reads about in the tabloids.

Renault accuses Red Bull of forgetting the good times - the successes - and putting all the blame on its power units, whilst the Austrian team lashes out, vindictively, threatening to withdraw.

It's the kids you feel sorry for.

The latest rumours have Red Bull courting Mercedes and Toro Rosso turning to Honda, Motorsport.com claiming that Ferrari offered its engines but that they would be a year-old spec. Bottom line, says the German site, Red Bull will walk from the sport away if it cannot get the engines it wants.

Though there are contracts in place for 2016, we know that such things mean nothing in F1, and a shed load of cash would surely ease Renault's pain, the French manufacturer surely keen to get on with life rather than be tied to a partner with whom the spark has clearly long dimmed.

Whilst much of the public vitriol has come from the Red Bull corner, Renault's Cyril Abiteboul is not one to take things lying down.

Whilst team personnel and drivers head to the beach - or study for their driving tests - over the summer break, it would appear that at least the lawyers will be kept busy.

Which, sadly, is ever the case as far as F1 is concerned.