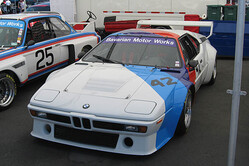 In 1978, plans were unveiled for a new series which would run during the (1979) European Grand Prix season, which would see F1 drivers at the wheel of the newly unveiled BMW M1 road car.

Over the course of two seasons, 17 races were held, each as part of the Grand Prix support race package - an additional non-championship event was held at Donington in 1979, a charity event for the Gunnar Nilsson Cancer Fund.

The series was popular with fans and drivers alike, Niki Lauda winning the inaugural series, ahead of Hans-Joachim Stuck and Clay Regazzoni, whilst Nelson Piquet won the 1980 championship from Alan Jones and Stuck.

Sadly the series was dropped in 1981 as BMW focussed on its F1 programme, which featured the Bernie Ecclestone owned Brabham team.

Christian Horner believes that a similar series, which would see the F1 drivers go head-to-head would give Grand Prix weekends, and the sport, a much needed boost.

"Rather than racing in categories outside of F1, one of things that I think would be a fun idea for the fans and the promoters, is something similar to a thing called Procar years ago where the top drivers get in a one-make car and race it out," the Briton told ESPN.

"Obviously in today's world of commercial tie-ups and pressures it wouldn't be simple, but it would be nice to explore the concept at certain events to bring out some older drivers as well and put the new guys against some of the older guys.

"On a GP weekend the drivers have more time than ever before on their hands. It is a concept to be discussed, but why not?"

At a time plans to take F1 forward are frustrated by the self-interest of some teams, it is worth noting that the Procar series suffered similar issues with some teams boycotting the series due to the fact that BMW was a rival manufacturer and others because the series ran Goodyear tyres.