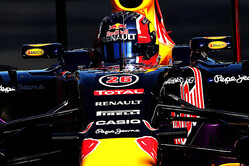 Daniil Kvyat: "We were really competitive today, the race was really fun, a little crazy with the rain, and I was enjoying myself. The team have done a great job and the car is handling really well. We will keep pushing to improve and move forward over the next few races."

Daniel Ricciardo: "I was really optimistic and excited for this weekend but it didn't work out for us on the day. We suffered an electrical problem which forced us to retire. I could feel the loss of power going into turn 7, we tried circulating for a few laps to try and fix it, we also tried to reboot the engine in the pits but unfortunately it didn't work. The last few races haven't been kind to us but that's racing. We have some time off to look forward to and we'll go into Hungary a little more hopeful as the track there should suit us better."

Christian Horner, Team Principal: "The weather produced an exciting British Grand Prix, adding an interesting twist which hopefully the fans enjoyed. Dany drove a great race, and all weekend he has done a good job. He possibly could have been in contention for a podium if we had pitted him earlier when he was fighting with Sebastian, and he also spun on his in-lap, but nonetheless, he drove a very strong race. Unfortunately, for Daniel, he suffered an engine energy related issue which forced him to retire early."

Thierry Salvi, Renault: "Daniil had a good start and managed to stay at the front. His performance in the wet was strong and he deserved the finish. Daniel suffered an electrical issue during the race, which affected both the ERS-H and K. Despite several resets, we were not able to fix the issue on track and had to retire. The problem is under investigation and we will resolve it soon."