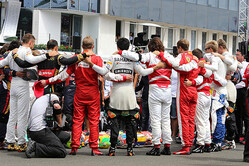 Almost a week later than planned, thanks largely to editor Chris Balfe finding himself trapped in a the newly-built (for 2015) 'Facility for the Management of Vexation and Exasperation Resultant of Continued Deficiency of High End Partner' somewhere in the McLaren Technology Centre, the Pitpass team delivers its report on the Hungarian Grand Prix.

And Max Noble, Mat Coch and Balfe have a lot to say, from the positives of the race and the touching tribute to Jules Bianchi to what exactly is Red Bull going to do about its engine problem.

The trio agree the minute's silence, and subsequent national anthem, before the race was a powerful and emotive tribute to Bianchi and the race a fitting way to celebrate the fallen Frenchman.

It was a race that had everything, like a Hollywood script, which did much to bely predictions that the narrow, twisty Hungaroring circuit would produce a tedious procession.

Wandering slightly off topic Noble and Balfe sing Kimi Raikkonen's praises, urging the Ferrari top brass to sign him for another year. Coch though is less convinced, suggesting his Ferrari dream team would include Romain Grosjean for a year before he looked at one of this year's superstar rookies.

While the team cannot agree on Raikkonen's future they do accept that it's a clear signal of the quality on the grid right now and the depth pf talent it currently boasts. Well, aside from Pastor Maldonado.

McLaren gets a thumbs-up for its performance, with a special mention for Fernando Alonso who, according to Balfe, is emerging as a genuine leader at Woking for the first time in his career. Our editor is also impressed by Sebastian Vettel's linguistic skills.

Noble asks whether Mercedes is really all it's made out to be after a performance that saw it wilt rather alarmingly under pressure.

And there's also no fooling the guys who agree that Red Bull getting both drivers on to the podium was a fine result, but doesn't change the fact that its engine is producing rather more donkeys than stallions.