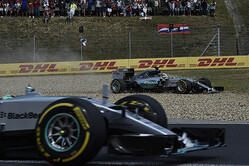 Everything you need to know about the Pirelli Magyar Nagydij... all the details, stats, pictures and quotes.

The Race in Pictures

How Teammates Compare in Qualifying