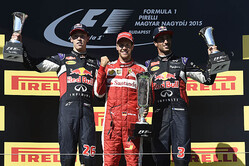 Ferrari's Sebastian Vettel claimed his second win of the season with a thrilling victory, in a race that was characterised by incidents, penalties and a lengthy safety car period, which closed up the field towards the finish and added more variables to the strategy.

Vettel's victory was made possible after he made an excellent start from the second row of the grid to take the lead by the first corner. But he had to fight hard to keep it, after the field was compacted by a safety car, in place to protect the cars from damage caused by debris on the main straight. As a result the cars passed through the pit lane repeatedly - with few drivers taking the opportunity to change tyres.

This safety car period caused strategies to be disrupted. But despite this moving target, Vettel only briefly lost the lead to his team mate, Kimi Raikkonen, before regaining it all the way to the finish - with the Ferrari team executing a perfect strategy over all 70 laps. Vettel started the race on the soft tyre, before completing a second stint on the soft tyre and ending it on the medium: just as we had predicted.

Mercedes driver Nico Rosberg chose an alternative strategy by completing only one stint on the soft tyre and then finishing the race on the medium tyre - but a certain second-place finish was taken away from him almost within sight of the finish, when he picked up a puncture following contact with the Red Bull of Daniel Ricciardo.

Ricciardo eventually finished third, with his team mate Daniel Kvyat claiming his best-ever finish in second (despite a 10-second penalty), confirming the pace of Red Bull seen during free practice and qualifying in Hungary. It was also a career-best result for Toro Rosso's Max Verstappen, who finished fourth.

All the drivers apart from Pastor Maldonado started on the soft tyre - but a very wide variety of strategies were seen afterwards, with the track temperature increasingly gradually during the course of the race after a relatively cool start of 38 degrees centigrade.

Paul Hembery: "Congratulations to Sebastian Vettel for winning one of the very few races that had eluded him so far and to Daniil Kvyat for his first F1 podium. Hungary was one of the most dramatic grands prix we have seen for a long time, made even more complicated by the multiplicity of strategy options presented by the safety car running through the pit lane, and the fact that the race started in relatively cool conditions - compared to what we saw previously this weekend - and then got warmer. As a result, we saw a number of very impressive performances, with drivers making the very most of all the opportunities presented to them; helped by the right calls from the pit wall. The fans were treated to a thrilling spectacle that showcased all the drama of this thrilling sport."

We predicted a two-stopper as the most likely winning scenario for the 70-lap race, and this is exactly what Vettel chose, in line with our expectations. Our prediction said that after starting on soft, it would be quickest to stop for soft again on lap 29 and finally medium on lap 53. Vettel actually stopped on laps 21 and 43.