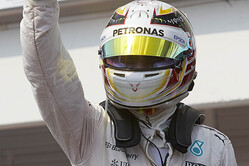 Mercedes driver Lewis Hamilton has claimed his fifth pole position in Hungary, after a qualifying session that was held in 52 degrees of track temperature. Some of the warmest conditions seen all year made the task of the tyres even harder at the tight and twisty Hungaroring, where one corner flows into another with a relatively low average speed.

All the drivers used the P Zero Yellow soft tyre to get through Q1, with the exception of Red Bull's Daniel Ricciardo, who used two sets of P Zero White medium, which is theoretically around 1.8 seconds slower per lap. Nonetheless, last year's Hungarian Grand Prix winner still managed to set 12th fastest time overall in Q1 and P4 on the grid – underlining the promising pace shown by Red Bull in free practice yesterday.

For the rest of qualifying all the drivers used the soft tyre, in order to extract the maximum performance possible for their cars. However, Q2 was interrupted with five minutes to go after the McLaren of Fernando Alonso stopped on the circuit.

Lotus driver Romain Grosjean was the only driver in the top 10 to save a new set of soft tyres for the race, having completed his first Q3 run on a used set.
Having gone quickest in all three sessions, Hamilton claimed pole with his second run in Q3 with a time of 1:22.020s: considerably faster than last year's pole time of 1:22.715s (which was already broken in Q2).

Hamilton was also fastest in the final free practice session this morning, again using the soft tyres. The extra speed of this compound is likely to push the teams towards a two-stop strategy for the race tomorrow, with two stints on the soft tyre followed by a final stint on the more durable medium. This is assuming that conditions stay broadly similar to those seen today: slightly cooler weather is expected on Sunday.

Paul Hembery: "The hot weather in Hungary has continued and our tyres are still delivering the performance we expect from them, despite these challenging conditions. The soft tyre has a clear performance advantage, which makes Daniel Ricciardo's performance in Q1 on the medium all the more impressive. The indications are that we'll see a two-stop race tomorrow, and while Mercedes seems to have an advantage for now, the race pace could be more closely matched between other teams further down the field. We're the event sponsor for this grand prix, a historic venue with passionate fans that has produced some classic races in the past."

The fastest strategy on paper for the 70-lap race is theoretically a two-stopper (start on soft, soft again around lap 29, medium between lap 53-54). With overtaking quite difficult on the narrow Hungaroring circuit, some of the faster drivers might try a three-stop strategy in order to gain track position – but this depends on whether or not they have enough of a speed advantage to overtake.