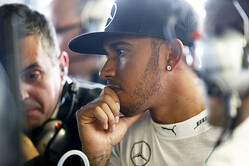 Predictably, Lewis Hamilton headed Mercedes teammate in this morning's session, however, the session was overshadowed by a massive accident involving Sergio Perez and then a later less spectacular incident involving Kimi Raikkonen.

Whilst it is though a technical, possibly suspension, failure led to the Mexican's crash which saw the Force India spear across the track and flip, in Raikkonen's case the front wing appeared to become detached from his car. In other words, both incident appeared to be the result of technical failures.

Such was the damage that Perez' car will not be repaired in time for this afternoon's session, though the Mexican, none the worse for his experience, was fully up for it.

As expected, the nature of the track, which doesn't make huge demands on power, has been good for the Red Bulls and Toro Rossos, Ricciardo and Kvyat finishing fourth and fifth.

Due to the lack of use the track is always 'green' however, this year grip levels appear to be worse than ever. Indeed, despite the high temperatures drivers claim it is increasingly difficult to get heat into their tyres.

None of this really affected Lotus however, where Pastor Maldonado and Jolyon Palmer were forced to sit out most of the session after Pirelli refused to hand over any rubber - an essential bit of kit on any F1 car - until the necessary monies had been paid.

After being replaced this morning by their team's reserve drivers, Roberto Merhi and Romain Grosjean are back in action this afternoon.

Tyre choices this weekend are medium (prime) and soft (option), a combination used in three of the first four races but not seen since.

Ahead of the green light there is talk of Hulkenberg not running this afternoon as Force India continues its investigation into his teammate's crash.

Eager to get to work, Stevens is all alone at the end of the pitlane, the Manor driver performing a practice start. He is followed by Merhi and Button.

"The investigation on the causes of Checo's crash is still ongoing," confirms Force India, "neither Nico nor Checo will take part in FP2 at this stage."

As the Manor pair improve - Stevens to 31.312 and Merhi to 32.790 - more and more drivers pour on to the track, having lost track-time due to the red flags earlier.

In no time at all, the Manors are pushed to their usual place on the timesheets as Sainz posts a new benchmark (27.884). Nonetheless, the Spaniard isn't happy, "very, very, very tricky track," he says.

Raikkonen goes quickest (27.512), ahead of his Ferrari teammate, but moments later Hamilton, having gone quickest in all three sectors, posts 26.132 despite a huge wobble in T4.

Rosberg clearly unhappy with Maldonado (who isn't?) as the Lotus driver gets in his way at T13, elsewhere a big lock-up for Hamilton.

T4 is proving problematic for a number of drivers , most of them running wide at some point.

Bottas is late, late, late on the brakes as he enters the pits, the heat clearly getting to the Finn.

Despite a major lock-up, Ricciardo improves to second, the Australian being the last of this afternoon's runners to post a time.

Just under half-an-hour into the session, Raikkonen makes the switch to options. With the added bonus of a clear track the Finn goes quickest in all three sectors, crossing the line at 25.134, albeit only 0.479s quicker than Hamilton who was on primes, in traffic and made a mistake.

Also on the softer rubber, Nasr and Ericsson improve to sixth and seventh.

Now on the softer rubber, Hamilton runs wide in the infamous T4, as Raikkonen fails to improve on his previous best.

Out come the yellows as Vettel spins in T12.