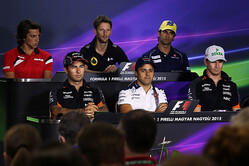 Clearly all our thoughts this Hungarian Grand Prix weekend are with Jules Bianchi and his family. Many of you were at the funeral this week. Perhaps we should start with a word or perhaps a favourite memory from the drivers about their colleague. Romain, would you start?
Romain Grosjean: Well, as you can imagine, I've got questioned a few times. I cannot pick up a favourite memory because I've got too much with Jules. I think the first time I heard his name was back in 2003. He was a much better driver in go-karts than I was; he was a bit younger. Then he did follow up in all categories what I did and he won everywhere. I think we shared a lot with Jules. It was a very nice ceremony. It was very emotional. His parents were, I think, happy to see us. Of course, this week all our thoughts go with him but personally I will never forget that we race and we race for Jules as well.

Felipe?
Felipe Massa: Jules, first of all, I mean, he was a great friend. [When] I met him he was still racing in go-karts, because we have the same manager. [When] Nicolas [Todt] started to work with Jules he was still at the end of his go-kart career and I met him in that time. For me he was a fantastic boy, very nice, very humble and an amazing driver. Unfortunately in Formula One he didn't have the opportunity to race in a competitive car; to show his talent. He showed us anyway by finishing in the points in Monaco with a car he was driving which everybody knows was like… it was an amazing thing he did in that race. But for me the experience I had with Jules was also that we did a lot of go-kart together, even in Brazil, and in my experience he was the best go-kart driver I saw. It was amazing the way he was driving go-karts. It was maybe the opportunity we had to race together in a similar kart. It's not nice to see has happened. It was so difficult to be there in the church, to understand what's happened, it was so sad. But I'm sure he is in a good place, racing, enjoying and definitely looking here to all of us, from whatever place he is, I don't know, but I think he was an amazing boy and a fantastic driver that I really hope the best for his family as well. It was a very difficult day to be there.

Roberto?
Roberto Merhi: The first time I met Jules was in 2002 in a karting race. It was a race in Spain and he was coming from France and normally when you are that young to come to a track that you don't know, in Spain, that you have never raced, it's very hard to be quick and I remember I was really surprised to see that guy that was really quick immediately on that track. He really impressed everybody. After that I followed him really closely. He was always the driver - the reference. He was all the time the quickest and doing really great things. Obviously, when I jumped into Formula Renault in 2007 we did a few races together because he also jumped in 2007 to Formula Renault and again he won straight away; his first year in the championship. It was pretty incredible, no? For me he was the biggest talent I saw in motorsport. Also, when I raced, back in 2009, with an F3, we were fighting against him because he was the man to beat that year and he won the championship with so many good drivers on the track and he won it really easy; just winning so many races. I think that shows how good he was and for me it's, to be honest, really a shame that he was not able to really show in an F1 car what he was able to do, because I think he was the best driver that I raced against and it's a bit of a shame what happened in Suzuka, but hopefully he's in a good place and enjoying.

Felipe (Nasr)?
Felipe Nasr: I met Jules on one occasion only but we shared the track in this go-kart race that Felipe [Massa] does, or used to do, every year. It was really the first time I got in a conversation with him and you could see the guy was special. Not only as a person - for sure he had a good heart inside of him - but all his techniques, all the junior categories he had been through. As everybody mentioned he was a real reference to all of us. Especially for me, I was always a few years behind him because we didn't have the same age. But you could definitely see he had all the ingredients to be a very good driver and to fight for something bigger in the future. I have all the respect for him, even though I didn't know him so well and I wish the best for his family as well.

Sergio?
Sergio Perez: Yeah, I met him when we were both in GP2. When I really spent more time with him was in the Ferrari Academy, when we were both doing the Ferrari Academy. You could see Jules was a very special driver but also a very special person that everyone seemed to like. He was just very humble and very human as well and he really left a big impact on the world. I think we all share the same opinion. I think Jules was a very special driver that didn't have the opportunity to show what he could do in Formula One in his short period. It was just enough to realise that he was a potential champion for the future. He was just a very, very special driver. It's very sad, you know. As drivers we share many moments - every Sunday, every Friday afternoon in the drivers' briefing. We're not the best friends but we always share moments. We do the same, all of us. We see each other every 15 days or so during the whole year, so we spend a lot things together and not to see him ever again, it really shocks you. It's very, very hard for all of us - I'm sure not only for the drivers, but for everyone involved in the sport - to lose someone, because you know you could be there, it could be your family. I was talking the other day to his father and it's just very, very difficult for the whole family. But his family is our family now and we really want to support them in any way because Jules will stay with us forever. I think what Jules did for the sport… he was just a great ambassador for us and he will always be in our hearts.

And finally, Nico.
Nico Hulkenberg: Yeah, he's been my team-mate twice, in 2008 in Formula 3 and 2012 in Formula One here. I remember in 2008, I was in my second in Formula 3, supposed to win the championship and he came in as a rookie, his first year. I remember his race in Mugello, I was starting from pole and he was starting second or third. Anyway, we take off, I'm leading, he's second and I'm seeing him in my mirrors, pushing really hard, really chasing me down, trying to get me. He was burning his tyres at the time, I was saving them, but it just showed how competitive he was and he was so hungry for success. Even outside the track he was a great guy, a lot fun, a lot of great moments together and we'll all miss him.

Thank you. Back to you Romain: the first lap at Silverstone was extraordinary, with both Lotus cars out. It seems as thought the team is still leaving a lot of points uncollected. What are your feelings at this stage of the season and where you go in the second half?
RG: Yeah, after last year it was important for us to get a good baseline when we started the winter testing, which was the case and then we had missed opportunities, especially in the first few race where actually Felipe [Nasr] did very well, he finished P5 in Melbourne, where we could have finished and it was the same in Malaysia. Then we got in the points, things were looking better but unfortunately we were a bit less lucky in the next races. I made a mistake in Canada, cost us a good chunk of points and in the last race we couldn't do much - we retired both cars at the beginning. I think we still have a very good baseline. We still have a few updates we would like to put on the car and then we could chase a little but more Force India, which just got in front of us in the championship.

Thank you. Felipe Massa, coming to you: you had 19 in the lead at Silverstone, including the opening lap. How did it feel to be in control at the front again and how does the team avoid a repeat of what happened at the other end of the race, where the podium got away from you?
FM: It feels amazing to be in the front! It's really a great feeling. Unfortunately it didn't stay until the chequered flag, but it was a great feeling to be back at the front, to be back fighting for the victory at least, you know. We couldn't manage to win at the end, not just for the first moment we lost the first and I went to second but also for the rain; we were struggling a lot in the rain and it's definitely part of our working to improve the car in the rain. But I think we need to take also the positive things, that the car was competitive, maybe we were very close to Mercedes. Even if they were a little bit quicker, we were not far. I think we were very close in that race. I think this positive aspect needs to stay in our brain and we need to try to understand how we can do that again but also stay in the front and finish and try to win the race. We will keep pushing.