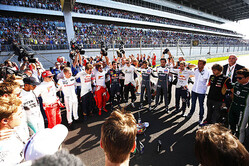 A minute's silence will be observed ahead of this week weekend's Hungarian Grand Prix in honour of Jules Bianchi who died last weekend.

Formula One Management has confirmed that the tribute to the Marussia driver, who perished last weekend, nine months after his horrific accident during the Japanese Grand Prix, will be held at 13:45 as the drivers prepare for the final race before the summer break.

Almost the entire grid was present at yesterday's funeral in Nice, which saw Sebastian Vettel, and Bianchi’s countrymen Romain Grosjean and Jean-Eric Verge among the pall bearers.

In their Hungary previews all the teams have paid tribute to Bianchi, who, it is claimed by former Ferrari chairman Luca di Montezemolo earlier this week, was scheduled to replace Kimi Raikkonen when he left the team.

Ahead of last year's Russian Grand Prix, the race following the Japanese event, the drivers gathered on the grid, along with Bernie Ecclestone and Jean Todt for a tribute to the Frenchman, having previously witnessed the entire Marussia team gather in front of teammate Max Chilton's car with a 'Racing for Jules' pit-board.