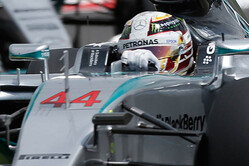 Ahead of today's opening session, the air temperature is 27 degrees C, whilst the track temperature is 38 degrees. Whilst it is already warm, to say the least, there is a threat of a storm later, as was the case yesterday.

As one can imagine, the sad events of last week hang heavily over the paddock, all the cars and drivers sporting tributes to JB17.

Tyre choices this weekend are medium (prime) and soft (option), a combination used in three of the first four races but not seen since. There are two DRS zones, one on the pit straight and the second on the short straight between T1 and T2. However, there is only one detection zone, just before the final corner.

The lights go green and Vettel leads the way, followed by Hulkenberg, Perez, Bottas, Stevens and Nasr. Soon there are 13 drivers on track.

The nature of this track, where power isn't vital, should help Red Bull and its sister team.

Kvyat complains that only one of his earplugs is working. Elsewhere, Raikkonen's car is sporting lots of flo-vis on its rear wing.

Five minutes in and all but Button and the Lotus duo have made an appearance. There has been talk of Lotus needing to provide Pirelli with some money in order to race this weekend... but we don't want the Enstone outfit blaming the media again do we?

Rosberg, who would love to go into the summer break having closed the gap to his teammate, posts the first time of the weekend, crossing the line at 1:29.215.

With that break in mind, and the fact that there is no more testing, the teams are trying out all sorts of test devices and sensors, Button, in particular, sporting a massive aero rake.

As Rosberg improves to 27.306, Hamilton stops to have his headrest changed.

Rosberg complains of oversteer in certain corners, whilst Hamilton says he heard a "buzzing noise to his left, like a bee".

Verstappen is the second driver to post a time, the Toro Rosso stopping the clock at 30.087. Moments later Hamilton goes quickest with a 26.286.

"High degree of track evolution so times should improve dramatically as the weekend goes on," says Pirelli.

A number of drivers clearly struggling for grip, Raikkonen and Verstappen amongst them.

A couple of incidents whereby drivers appear to trip over one another, "Sainz is blocking me", moans Kvyat. The Russian opting to back-off and give himself some free air.

Such is the traffic, Hamilton waves his hand in frustration as he encounters two slower cars, Sainz (again) being one of them.

As the opening half-hour comes to a close, the Lotus duo finally make an appearance. It would be harsh, under the circumstances, to mention 'free' tyres.

Massa is eleventh, ahead of Hulkenberg, Button, Ericsson, Stevens and Leimer. No times from Vettel, who is understood to have an electrical issue, Kvyat or the Lotus pair.

As has become the norm, there follows a long, long wait before there is any on-track activity.

After almost 17 minutes of total nothing, Nasr fires up his Sauber and heads down the pitlane, followed by Perez and Ericsson.

Both Sauber drivers have been retained for 2016, an announcement that raised a few eyebrows in the paddock... considering what happened to Giedo Van der Garde and Adrian Sutil.

A big, big lock-up for Nasr as Alonso and Button go eleventh and twelfth.

As Vettel complains of a "loss of power" coming out of T5, Kvyat, who had minimal running thus far, goes fourth with a 26.257.