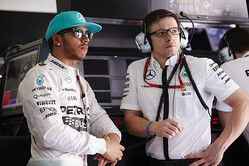 Ahead of today's sole practice session, the air temperature is 29 degrees, whilst the track temperature is 44 degrees. It's bright and sunny and warm, very warm.

Yesterday's action was overshadowed by two incidents, the first a massive crash involving Sergio Perez and the second when Kimi Raikkonen lost his front wing after running over the rumble strip.

Overnight, Force India has modified the rear suspension on the B-spec car, having opted to run neither driver in FP2 as a precautionary measure.

Predictably, Lewis Hamilton was quickest in both sessions, however, in FP2 the Red Bull duo of Daniel Ricciardo and Daniil Kvyat looked strong, finishing second and third.

The nature of the Hungary track, which isn't particularly demanding of engine grunt, should allow the pair to bag some points this weekend, though news that there will be no updates from Renault until Sochi (in October) suggest the pair should make hay while the sun shines.

Kimi Raikkonen was fifth, behind Nico Rosberg, whilst teammate Sebastian Vettel had a strange day which included an electrical issue, lots of offs and even a spin. Never a winner here, the German really doesn't seem at ease.

Carlos Sainz continues to impress, whilst Fernando Alonso will be slightly heartened to have finished eighth.

That said, Williams was not going for times, instead using the day pretty much for testing purposes, mainly concentrating on a new front wing, which is only available to Valtteri Bottas.

Indeed, with this being the last race before the summer break, and no further in-season testing, all the teams used yesterday's sessions for trying new parts and modifications.

Tyres this weekend are medium and soft, the performance gap between the two being in the region of 1.8 - 2.0 seconds.

Notwithstanding the Perez and Raikkonen incidents, there were numerous spins and offs as drivers struggled for grip on what is a notoriously 'green' track, T4 proving to be particularly difficult.

"Some really good news from the garage," says Force India, "the cause of yesterday's issue was identified and a solution put in place overnight..."

Vettel is first out, followed by teammate Raikkonen.

A 26.363 sees Verstappen go quickest as teammate Sainz locks-up after a mistake over the bumps heading in to T1.

Another mistake from Sainz, this time at T12 where he carries too much speed and runs wide. Elsewhere an off for Merhi and a spin for Perez at T1.

Raikkonen goes quickest (25.943) and Vettel second (26.322) as the TV camera picks up a piece falling from Hulkenberg's car.

As Sainz is told that winds are stronger than yesterday, McLaren takes some front wing off Button's car in an attempt to alleviate his problems.

After 20 minutes, we've yet to see times from the Mercedes, Williams or Red Bulls.

That said, Rosberg is on track and immediately goes quickest in S1. The German subsequently posts 25.201, 0.460s quicker than Raikkonen.

"I think we have to go back on the changes," says Button, feeling the team has gone backwards overnight.

Ricciardo's first flying lap sees the Australian go third (25.702), as the Force India duo switch to the option rubber having not run on it yesterday.

As Perez goes quickest in S1, Rosberg improves with a 24.873 to consolidate his top spot.