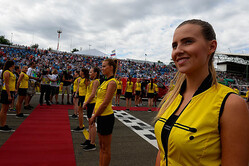 God forbid that we provoke Messrs Carter and Gastaldi at Lotus, but without wishing to put a total dampener on things, the prospects this afternoon don't look that encouraging. It is highly unlikely that F1 is going to go in to the summer break with the same feel-good factor.

Naturally, the death of Jules Bianchi, the first driver fatality the result of an accident during an F1 race in twenty-one years, had already cast a cloud over the event.

However, in the wake of an interesting, incident-filled race at Silverstone, many claimed the sport had rediscovered the 'wow' factor, that all was good and that the media was responsible for all the negativity anyway.

Nonetheless, the fact remained that at the end of the day, the three men standing on the podium three weeks ago were the same three men to stand on the podium on five previous occasions this year... and guess who fill the first three places on this afternoon's grid.

Year after year we are reminded that this tight, twisty track is difficult for overtaking - even though we have seen some great moves here - this year we are even told that it is too narrow.

With no real threat from the weather gods - although it is decidedly cooler today - we must therefore rely on the determination of drivers to impress existing (And potential) bosses, over enthusiasm and maybe even some unreliability. If not, we could be in for a long afternoon.

After all, based on Q3, it's not as though Nico Rosberg will be able to rise to the challenge to his teammate.

Our main hope, not wishing either of the Mercedes to suffer gremlin interference, is the battle behind on a track which will play into the hands of Red Bull and Toro Rosso since engine power isn't as vital here. Then again, with no upgrades until Sochi, the sister teams need all the encouragement they can get.

Ferrari looks good and in anyone needs a strong performance it is Raikkonen, a previous winner here. Fifth quickest in qualifying, today hopefully gives him a strong chance to impress.

The Williams duo has had a topsy-turvy weekend, hard to equate with that (on-track) performance at Silverstone three weeks ago. Here, where grid positions are so vital, could another 'rocket' start see Valtteri Bottas and Felipe Massa catch the opposition off guard?

Lotus, another team having a difficult weekend here, looks set to spend the afternoon fighting the Force India pair, the Silverstone-based outfit not quite recovered from Friday's horrific crash, traced to a suspension element damaged by excessive kerb loads.

Despite occasional signs of improvement over the weekend, McLaren is still struggling, even if the team has, albeit unwillingly, provided us with one of the iconic images of the year, that of Fernando Alonso vainly pushing his car back to the pits... and without the Mansell histrionics.

That said, having left Manor in its wake, for this weekend at least, the Woking outfit appears to have the edge on Sauber also. 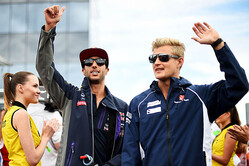 As the drivers head off for the parade, news filters through that Jules Bianchi's family has arrived in the paddock, having flown in in Bernie Ecclestone's private jet.

Fifteen minutes before the start of the race there will be a minute's silence for the French youngster, however, the family will also draw some comfort from the many tributes from his colleagues, their teams and the fans.

Tyre options this weekend are medium (prime) and soft (option), which have around 1.8s difference.

The fastest strategy for the 70-lap race is theoretically a two-stopper; start on the soft, softs again around lap 29, mediums between lap 53-54. With overtaking difficult, some of the faster drivers might try a three-stop strategy in order to gain track position - but this depends on whether or not they have enough of a speed advantage to overtake.

The pitlane opens and one by one the drivers make their way to the grid. Not only is it cooler today, there is substantial cloud cover.

There are lots of practice starts indeed, some of these will be with Spa, where the new 'no assistance' rules come in to play.

As the cars finally begin to take their place on the grid, the air temperature is 22 degrees C, around 10 degrees down on yesterday, and the track temperature is 36 degrees, also significantly down.

At 13:45, the entire circuit falls silent as the post pays tribute to Jules Bianchi, the drivers joined by his family. The emotion, as the drivers form a circle and link, is almost overwhelming.

As the field heads off on the warm-up lap, the sun is breaking through the clouds, but it remains cooler.

Winner here last year, Ricciardo is told that it will get hooter as the afternoon progresses.

As they head off, all getting away cleanly, all but Maldonado are sporting the option (soft) rubber.