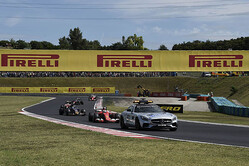 Still buoyant following the British Grand Prix at Silverstone, race fans were treated to a further feast of entertainment just weeks later at the tight and twisty Hungaroring.

Warnings of a lack of overtaking, the narrowness of the track were soon forgotten as F1 delivered a show that will have had even the most difficult to please fan on the edge of their seat.

Still concerned at the negativity prior to this brace of bravura performances, Bernie Ecclestone - ever influenced by the media - has drawn inspiration from events in Hungary.

However, it wasn't the poor starts from the Mercedes duo, the over enthusiasm of Lewis, the dogged determination of Fernando or silky smooth skills of Sebastian that flicked on a lightbulb in the F1 supremo's mind... not according to Gurmit.