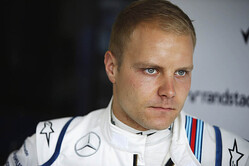 Valtteri Bottas admits to being unsettled by continued speculation over his future.

In recent months, the Finn has continually been in the headlines, linked with the seat at Ferrari currently filled by countryman Kimi Raikkonen.

Earlier this month the Italian media claimed that Ferrari has paid Williams €12m (£8.3m) to release the Finn from his current contract which runs out at the end of 2016. The Maranello outfit's own option on Raikkonen for 2016 running out at the end of this month.

However, whilst a certain podium for Raikkonen in Hungary last week was wrecked by an ERS failure, Bottas gave an unconvincing performance, which left many baffled.

"Obviously there have been some annoying rumours,' he told the Daily Mail. "Those are not true and they are not fair for Williams and not fair for Kimi. Before there are any facts we just need to wait and see what happens.

"Of course any speculation is always a bit disturbing," he told the tabloid, "but once you approach the race weekend you don't think about anything else but the driving itself and working with your team.'

"Mercedes are really strong at the moment but Ferrari showed in Budapest that it is possible to beat them," he said. "Never say never, we are still aiming to win races. They have a really quick car but anything can happen in motorsport. We need to believe in it and take every opportunity, it could be there this season."