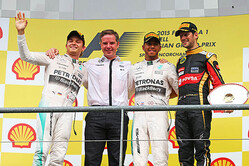 Lewis, your 39th grand prix victory, your 80th time on the podium - equalling your great hero Ayrton Senna - a pretty good day at the office?
Lewis Hamilton: Wow. How you guys doing, you good? We've had such a great crowd here this weekend. It's been incredible, the whole circuit just packed out with all you fans, so thank you all for coming. And for me, just an amazing weekend again. Incredible job done by the team throughout the pit stops, throughout the whole weekend, the guys back at the factory... You know, today was a dream. The whole weekend the car was fantastic, so thank you guys.

It seemed to me that the only real concern you had after the start was after the Virtual Safety Car and Nico was able to get that gap down to just a few seconds. Any other concerns during the race?
LH: No. Nico had obviously good pace but I was able to answer most of the time, so I was fairly relaxed at the front. The car was feeling great and it was really about looking after the tyres, particularly at the end when I saw that one of the tyres had blown on another cars I was being very cautious, so in the last two laps Nico was allowed to close the gap. No, I felt in control all the way and as I said a lot of good assistance from the team, so I felt like 100 per cent all weekend.

Nico, congratulations. It seemed it all went away from you at the start. You were able to come back at Lewis later in the race, but just talk us through what went wrong there?
Nico Rosberg: Yeah, I just completely messed up the start, so that was very annoying. I fought my way through. I gave it absolutely everything, I mean we were both on the edge all the way through. The car has been amazing, so I'm really thankful to the team again for giving us such a car. It's awesome to drive it. And Lewis did a great job, so deserved to win. I tried to give it everything but not enough.

Well, you certainly kept him honest. We know that you have a big event coming up in the coming few days, so you'll not be wanting to spend too much time on the interviews. Your lovely wife is expecting your first child, so you're rushing off after this?
NR: Yeah, I'm rushing off very, very quickly yes, because we're expecting our first child any moment, so a very exciting time, looking forward to that, probably next week, let's see.

We'll, good luck and congratulations for that. Now, Romain, welcome back, your 10th podium. This circuit saw one of the low points in your career I guess when you got a one-race ban, but focusing on this high today: fantastic and very timely for the Lotus team.
Romain Grosjean: Hello, everyone. It has been an incredible weekend for us. A great qualifying yesterday, unfortunately we had the grid penalty, and a good race. I still can't believe that we are on the podium. Those guys have been working hard to give us that car to be able to be here today. Of course going into turn one, every time I take a start in Spa, I will remember 2012 but I think it made me stronger and indeed allowed me to be 10 times on the podium. Being here today is kind of special I think, it has the feel of a race win.

Well congratulations, fantastic to see you back up here and you've never stopped smiling through the difficult times? Lewis, as you recognise the fans down there, just a closing question from us. As you look into the second half of the season, it's still very close with your team-mate, but do you start to feel now that you're getting your hands closer to another world title?
LH: It definitely way too early for that. But as I said coming into this weekend, you want to get those pole positions and translate them into wins and hopefully today is the beginning of that, so I'm looking forward to the next races, I hope to see many of these fans at some of the other races coming up.

Lewis, Mercedes' seventh one-two finish of the season, 2015, you just said on the podium there you were under control. Obviously a great start but obviously Nico was closing at various phases before the virtual safety car. I just wonder if the virtual safety car, also the cloud cover coming over, just helped you to bed in those medium tyres because after that initial spurt from Nico in the first lap or two after the virtual safety car, you were able to just stretch away from him. Maybe you could just tell us about that phase of the grand prix and his challenge at that point?
LH: It was really just about utilising the tyres, not having to push. I didn't really push very hard on the out-laps, took it quite easy for the first three or four laps in which there was areas where Nico would be closing. And then I started to push after that - but I was really never in a position where I was nervous or anything. I had great pace in the car, the balance felt fantastic. It actually was getting better throughout the race. There was no real need to push any more than I was already. I had a comfortable gap and at the end of the day it doesn't matter if it's won by a tenth or won by ten seconds. So, at the end I saw that there was a blow-up so I was being very cautious with my tyres. I'd done pretty well up until then so I was just going to make sure I bought it home.

You said on Thursday this wasn't one of your favourites. Is it moving into becoming one of them again now?
LH: I didn't mean that it wasn't one of my favourites. Monaco of course is definitely a favourite but this is a great circuit. It's incredibly challenging. The weather's been great this weekend so for sure when the weather's as good as it is today it really does make it a great weekend. Incredible turnout from all the fans, which is really good to see. A lot of British flags, which I really appreciate but the track is really fun to drive. It's a historic circuit. Eau Rouge. You can never get tired of driving through Eau Rouge. So it'll always be a special circuit, for sure.

Coming to you Nico. Obviously a terrific recovery after a poor getaway. Some good strategy as well that got you up into second place around the first pitstops - but tell us, from your perspective, about the way that gap seemed to come down and then just rose again.
NR: Yeah, the start was really bad so I need to practice that a bit more I think, and then after that I just benefited from the fact they weren't racing me, in front of me. They were just racing all the people behind, so they just pitted, I suppose, because I wasn't their opponent. They assumed I was too quick anyway - rightly so - and then, yeah, I had a clear path in front, chased down Lewis. I was always coming closer except for this one phase in the second stint, towards the end where Lewis pulled away. So that definitely cost me a bit. Then on the Option felt great again. I was qualifying lap every lap trying to hunt Lewis down but he did a great job and it wasn't enough.